Manchester, July 26:  Openers Rory Burns and Dom Sibley consolidated England's lead and further strengthened their grip on the game as the hosts reached 86/0 at Tea on Day 3 of the third Test at Old Trafford here on Sunday. England lead West Indies by 258 runs and at the break Burns was batting on 38 with Sibley reaching 40. 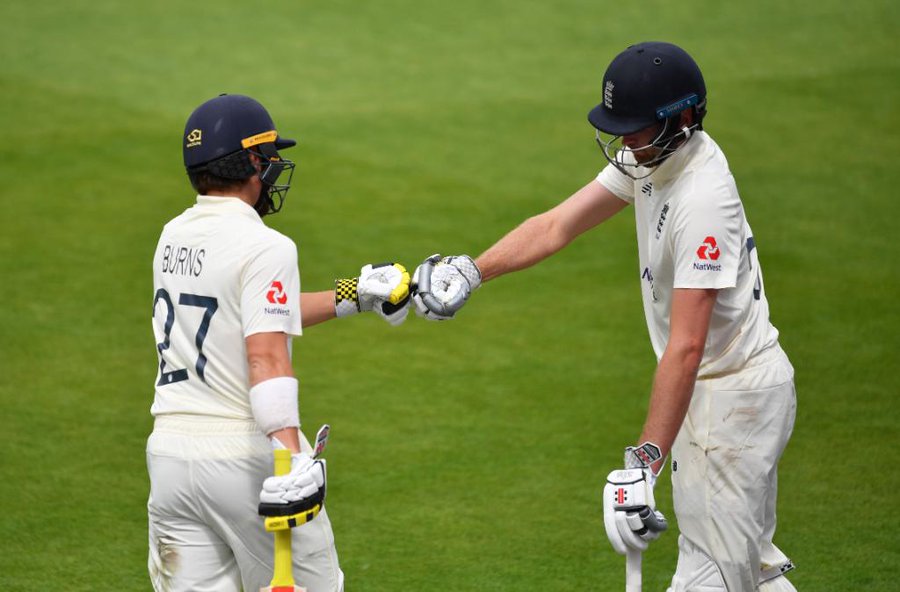 West Indies wicketkeeper Shane Dowrich was forced to leave the field early in the afternoon session after being hit on the face by a Shannon Gabriel snorter. The red cherry burst through his gloves and struck him on the lower part of his face.


Can't compare anyone in India to Ben Stokes: Gautam Gambhir

Uncapped stumper Joshua Da Silva replaced Dowrich behind the stumps after Shai Hope could not continue doing the job for long.

But the second session, like the first, belonged to England as Burns and Sibley looked to first graft and then put the bad balls away as the tourists lost steam.

Jason Holder used as many as five bowlers but none, including Kemar Roach, worked as the hosts pulled away in style. There was turn on the wicket as Tea neared with Rahkeem Cornwall coming close with an LBW appeal and Roston Chase beating Burns a few times, but the openers stood their ground.

Earlier, Stuart Broad grabbed six wickets as England put themselves in the driver's seat to win the three-match Test series, level at 1-1 at present.

Resuming at 137/6, Windies saw overnight batters skipper Holder (46) and Dowrich (37) share a 68-run stand for the seventh wicket to revive their flailing fortunes.

But once Broad got into the act, there was no stopping the veteran pacer as he trapped Holder in front to then dismiss Cornwall in similar fashion. Roach helped Broad bag his five-for by edging a full length delivery to England captain Joe Root, who took a low catch at first slip.

Finally, Dowrich's vigil came to an end as a back of a length Broad beauty saw him hole out to Chris Woakes at mid-on. The Windies folded for 197.

England went into the second essay with a lead of 172 and firmly on course to stage a come from behind series win after the tourists won the first Test.