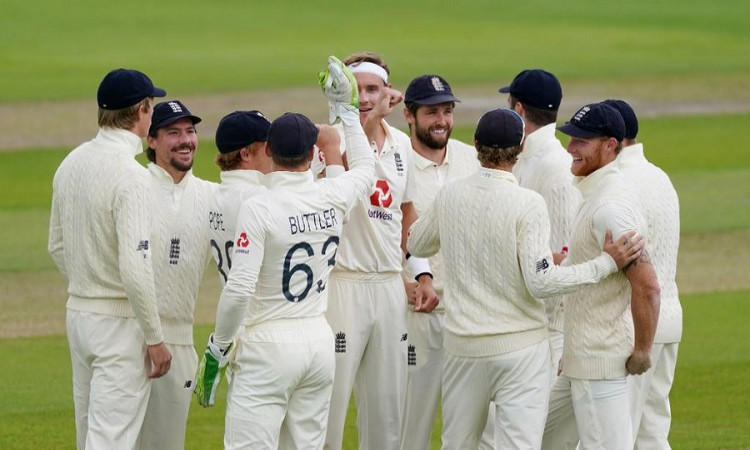 Manchester, July 26: West Indies were saved from losing more wickets by the fading light on Day 2 of the decisive third Test against England at Old Trafford on Saturday. The England players were slow in getting off the field as umpires called a halt to the game due to poor light for a second day on the trot in this Test.

Shamarh Brooks was dismissed in the first over after Tea, getting an inside edge on a delivery from James Anderson that moved in. The ball brushed the batsman's back thigh before flying to wicketkeeper Jos Buttler.

Roston Chase and Jermaine Blackwood held on before the latter was trapped in front of his stumps by Stuart Broad as he brought his bat down late to a delivery that nipped back in off the seam. Broad took a glance at the umpire only after punching the air.

Chris Woakes then hit the middle stump behind Blackwood with a full length delivery that went through the gates.

Four more overs could be bowled in the session in which Dowrich struggled to deal with the short delivery. Root was alternating Woakes and Jofra Archer but the umpires called the players off after the first ball of the latter's 14th over.

Earlier, England were put firmly in the driver's seat by Broad's stunning 62 off 45 balls. The innings helped England post a first innings total of 369.

The second session saw the England fast bowlers all over the West Indies top order. Kraigg Brathwaite was the first to go as he nicked a Broad off-stump channel delivery to Joe Root at slips.

John Campbell made a meal of Archer's bouncer for Rory Burns to take an easy catch at gully while Shai Hope, looking to get back among runs in Tests, had no answer to a perfect Anderson middle-and-off line delivery which kissed the bat and flew to wicketkeeper Jos Buttler.