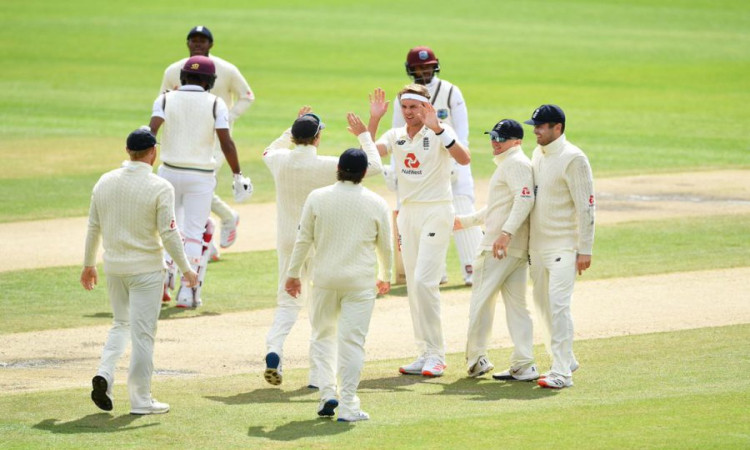 Manchester, July 28:  Veteran seamer Stuart Broad was the cynosure of all eyes as he galloped into elite company and helped England thrash West Indies by 269 runs in the rain-affected fifth day of the third Test at Old Trafford on Tuesday. The win saw the hosts come from behind to win the three-match Test series 2-1.

It was poetic justice as Broad, who scored a breezy 67 in the first innings and snared 10 wickets including his 500th, forced Jermaine Blackwood into a flashy pull and edge the ball to wicketkeeper Jos Buttler for a caught behind to bring an end to the game.

It was Broad's first 10-wicket match haul since 2013. West Indies had won the first Best but England showed who's the boss on home turf by winning the next two in grand fashion.

The Windies were set a target of 399 and folded for 129 after England made 369 in the first essay riding on fifties from Ollie Pope (91), Buttler (67), Broad and Rory Burns (57). The tourists were shot out for 197 in their first innings with Broad returning with figures of 6/31.

Broad finished the visitors' second innings with figures of 4/36 and Chris Woakes grabbed a five-for (5/50).

The man of the moment was Broad on the fifth day as he added a fresh feather to his illustrious cap by becoming the seventh bowler in the history of Test cricket to take 500 wickets.

The 34-year-old scalped two wickets in the last session of Day 3 to leave West Indies reeling at 10/2. There was no play possible on Day 4 due to rain.

Broad, who has represented England in 140 Tests, was stuck at 499 at the end of third day and reached the 500 mark on the last day of the Test match after taking the wicket of Kraigg Brathwaite for 19.

Broad became the second Englishman to achieve this impressive feat after partner-in-crime James Anderson, who had also achieved the feat against West Indies in 2017 at the Lord's. Interestingly, Brathwaite was Anderson's 500th scalp as well.

Broad has also become only the fourth fast bowler in the history of Test cricket to scalp 500 wickets. The top three spots in this list are held by spinners, followed by pacers.

The Windies, meanwhile, failed to alter the script as they kept losing wickets without much resistance.

Shai Hope (31) holed out to Broad off Chris Woakes while Shamarh Brooks (22) inside edged a Woakes delivery to Buttler for an easy caught behind.

Post Lunch, rain played hide and seek but could not stop England's march as none of the Windies batsmen had an answer to Woakes and Broad's bowling.