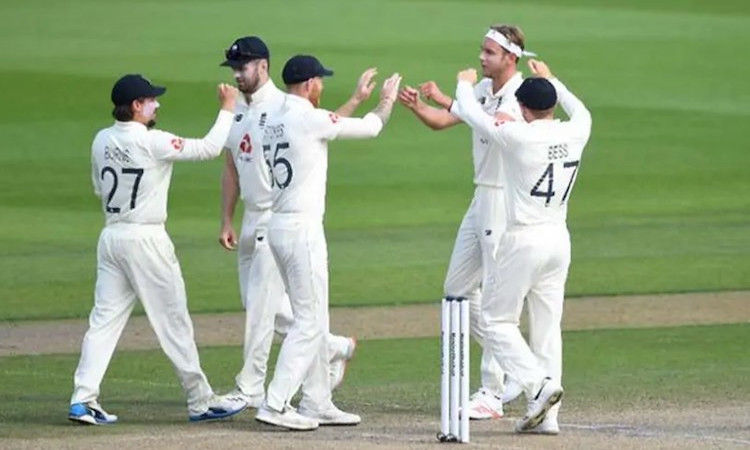 Manchester, Aug 8 - Pakistan hold a lead of 244 with one wicket in hand at the end of what was a breathless day of Test cricket at Old Trafford on Friday. England's bowlers managed to bring the hosts back into the game towards the end of the final session of Day 4 after their own batsmen were found wanting against a clinical performance from the Pakistani bowlers.

Pakistan's batsmen looked to keep a good flow of runs going but England kept chipping away at the visitors' batting lineup. It however looked like Pakistan could manage a lead of over 300 runs in during the fifth wicket partnership between Asad Shafiq and Mohammad Rizwan.

Shafiq was finally dismissed when Dom Sibley managed a direct hit from covers while the batsmen went for a quick single. Replays showed that Shafiq was not even in the frame when the ball hit the stumps.

The flow of runs however continued when Shadab Khan came to the crease and Root finally had to resort to calling on Ben Stokes who managed to whizz the ball past Rizwan's outside edge with the first delivery he bowled.

Stokes struck in his next over getting Rizwan out LBW with a delivery that nipped back into the right hander.

Broad then set up Shadab with consecutive short-pitched deliveries before sending in a full one that crashed into the batsman's knee roll. While the umpire did not raise his finger, England reviewed and the replays showed that the ball would have taken the leg stump.

It left Yasir Shah to fetch as many runs as he could with the wobbly tail that Pakistan possess. Stokes struck again with the wicket of Shaheen Afridi and that delivery was also the last of the day.

Earlier, a fast bowling masterclass from Pakistan's pace battery helped them limit the runs that came from the England top order.

Ollie Pope and Jos Buttler gave the England innings some impetus and the former was dismissed by Naseem Shah on 62. England's tail however gave took out some valuable numbers off Pakistan's lead with Stuart Broad smashing 29 off 25 balls.

It was the spinners Yasir Shah and Shadab Khan who closed off the England innings. While Shadab picked two, Yasir led the team off after England were dismissed on 219 with a four-wicket haul.

Yasir will now be back on the field on Day 4 with Pakistan's no.11 Mohammad Abbas, batting on 12 off 15 balls.