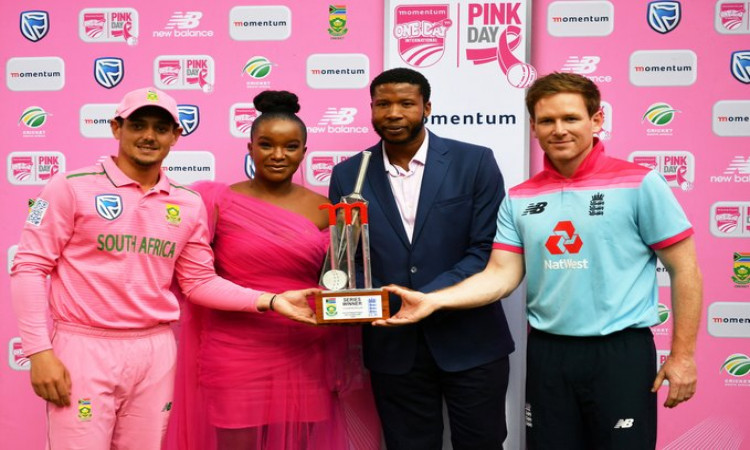 Johannesburg, Feb 10:  Joe Denly scored a half century as England beat South Africa by two runs in the third and final match here on Sunday to level the three-match ODI series.

South Africa had won the first game and the second was washed out.

Looking to win the series 2-0, the Proteas were restricted to 256/7 after World champions England skipper Eoin Morgan asked them to bat first.

Skipper Quinton de Kock scored 69 off 81 balls (5x4, 2x6) with David Miller also smashing a 53-ball 69 towards the end of the innings to drag the hosts from a hole and take them to a challenging total on a wicket where batting was not easy.

For England, leg-spinner Adil Rashid was the pick of the bowlers with figures of 3/51.

Chasing 257 for victory, England openers Jason Roy (21) and Jonny Bairstow (43) shared a 61-run stand to provide a solid platform but once Bairstow was removed by Lutho Sipamla, they kept losing wickets with Denly (66) holding one end up.

Joe Root (49) and Tom Banton (32) aided the cause with handy knocks but it was allrounder Moeen Ali (17 not out) in the end who took his side over the line with 40 balls remaining and more importantly, two wickets in hand.

For South Africa, Lungi Ngidi and Beuran Hendricks picked up three wickets each.