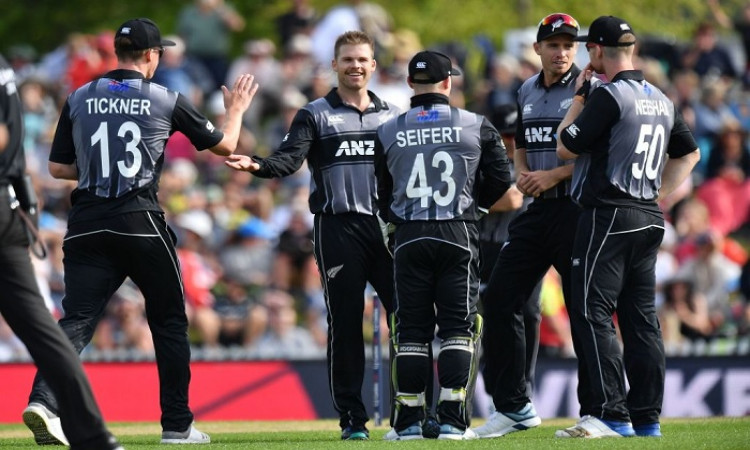 Nelson, Nov 5: A quick-fire half century from Colin de Grandhomme followed by a disciplined bowling performance by the pacers helped New Zealand beat England by 14 runs in the third T20I at the Saxton Oval played on Tuesday.

Chasing 181, England at one stage were on course of winning with 139/3 on the scoreboard in the 15th over. However, the Black Caps struck with back to back wickets and derailed England's chase who were ultimately restricted to 166/7 in their allotted 20 overs.

Also Read: We all are cause of growing pollution: Harbhajan Singh

For New Zealand, Lockie Ferguson and Blair Tickner were the chief tormentors as they both picked two-two wickets each and gave 50 runs in their eight overs.

Earlier, after electing to bat, the Black Caps went off to a flying start as the openers collected 40 runs within the first four overs before Martin Guptill - after scoring 33 off 17 balls - became the first scalp of Patrick Brown.

After that, the hosts lost two quick wickets before de Grandhomme (55) stitched together a 66-run partnership with Ross Taylor (27) to provide the team with a launch pad to unleash.

Towards the end, Mitchell Santner and James Neesham played cameos of 15 and 20 to take New Zealand to 180/7.

England started their chase on a bright note as Tom Banton and Dawid Malan collected 27 runs in the first three overs before Banton was clean bowled by Tickner at his individual score of 18.

Malan, who has recently been signed by Yorkshire, didn't get affected by his partner's loss and along with James Vince, stitched a 63-run partnership, taking England to 90 in 10 overs. However, just when England seemed to be cruising, Malan lost his wicket after contributing with 55 runs from 34 balls.

Skipper Eoin Morgan, who came in next, then took the team to 139/3 within the 15-over mark. However, just Santner got Morgan caught by Munro after the England captain made 18 runs. The England skipper's wicket led to a mini-collapse as the Three Lions went on to lose four wickets in the next three overs and could add mere 10 runs.

Tom Curran and Saqib Mahmood did try to take England across the line. But the task was too much as the visitors ultimately fell short by 14 runs and conceded a 1-2 lead in the five-match series.

The two teams will now lock horns in Napier in the fourth T20I on Friday.