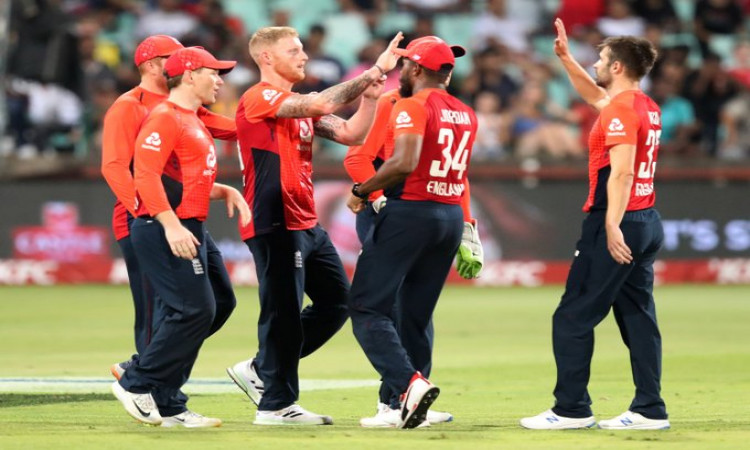 Durban, Feb 15:  England held on to their nerves and clinched a thrilling two-run victory over South Africa in the second T20I, and in the process took the ongoing three-match series into what can be expected as an exciting decider.

Chasing a mammoth 205-run target on Friday evening at the Kingsmead, the Proteas needed three off the last two balls , but Tom Curran dismissed Dwaine Pretorius and Bjorn Fortuin to secure the win for the visitors.

Also Read: Pacers shine for India on Day 2 of warm-up game vs New Zealand A

After winning the toss, the hosts asked England to bat who got a great start with Jason Roy (40 from 29) and Jonny Barstow (35 from 17) laying a solid base after Jos Buttler fell early.

Star all-rounder Ben Stokes had a rusty start but eventually got into his groove by 47 off 30 balls. However, it was Moeen Ali's blitzing innings of 11-ball 39 which took England past the 200-run park. Moeen smashed four sixes and three fours and just three of his runs failed to come off boundaries.

Temba Bavuma and Quinton de Kock got South Africa off to a rollicking start in their chase, with the wicket-keeper batsman continuing his excellent run of form, hitting the fastest fifty for the Proteas in T20Is off just 17 balls.

de Kock hit a stunning 22-ball 65 to keep his team into the match before Mark Wood delivered the wickets of the openers to bring England back into the game. Chris Jordan made South Africa's task even more difficult by picking two more wickets.

However, Rassie van der Dussen took the England bowlers to the cleaners on his way to 43, and it seemed with two balls left to go, the match and series would go South Africa's way. But Curran turned the match on its head. He first nailed his yorker to trap Pretorius LBW before Bjorn Fortuin fell from the final ball, with his paddle sweep finding Adil Rashid at fine leg.

The two teams will now face each other in the series finale on Sunday at the SuperSport Park in Centurion.