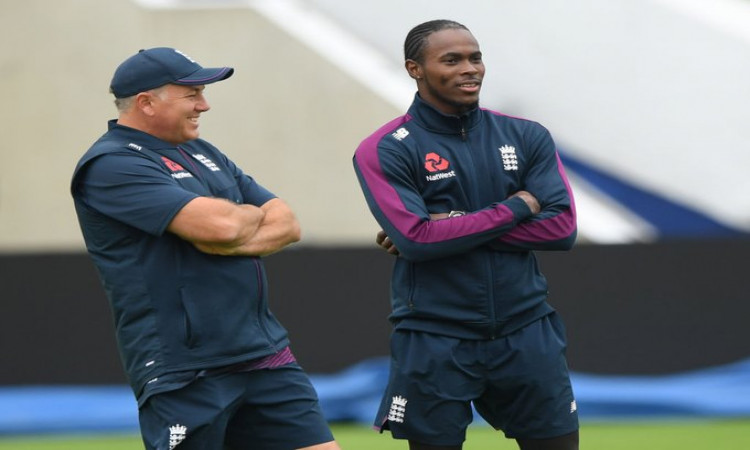 London, Aug 13: England assistant coach Paul Collingwood believes Joe Root and Co. should not put too much pressure on Jofra Archer and cannot afford to rely just on him in their bid to level the Ashes series against Australia in London.

England were beaten comprehensively by 251 runs by Australia in the first Test at Edgbaston last week with Archer left out with a side injury.

However, with James Anderson ruled out of the Lord's Test, Archer is set to make his Test debut in the match starting Wednesday.

"We can't say 'look Jofra, you are coming in to answer all the questions Australia are asking'," BBC Sport quoted Collingwood as saying.

"He is going to add what we have already," Collingwood said.

"We have got a very good seam attack and he gives us different options.

"He does have the confidence and X-factor about him but I don't want the team to rely on a young lad coming in and expecting him to beat the Aussies. It doesn't work like that," he added.

Meanwhile, former England skipper Michael Vaughan said he expects Archer to "have an impact" at Lord's if he is given his debut.

Archer grabbed the attention of the larger global cricketing audience with his exploits in the Indian Premier League before storming into the international cricket scene with his stellar performance in England's successful 2019 World Cup campaign. The Barbados-born fast bowler has 131 wickets in 28 First Class matches and scored over 1,000 runs in the longer formats.

The 24-year-old, however, has said that his performance in the World Cup should not lead to unreasonable expectations.

"What I would say is don't expect any miracles, firstly! Hopefully, I'm gonna make my debut sooner rather than later and I'll come in and do what I can. I can't work miracles - I'll try to, but I don't think that's how it might pan out. I'll try my best and I can only give my best," he said.

Jadeja a rockstar, want to play cricket like him: Agar