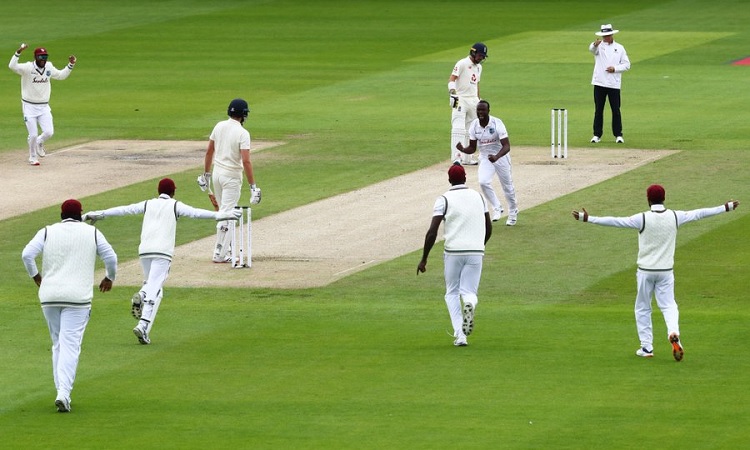 Manchester, July 24:  England lost second Test centurion Dom Sibley and captain Joe Root in the first session of the opening day of the decisive third Test against the West Indies at Old Trafford on Friday. They are 66/2 at the end of the session with Sibley's opening partner Rory Burns (33) and the talismanic all-rounder Ben Stokes (7) in the middle.

After West Indies captain Jason Holder decided to field first, fast bowler Kemar Roach struck in the very first over of the England innings, as he beat Sibley's outside edge with a delivery that was angled at the stumps and pitched on good length. The ball hit his pad and the umpire raised the finger. England did not bother with the review.

Also Read: Doors definitely shut for Dhoni if he doesn't do well in IPL: Dean Jones

This was followed by Root and Burns hanging on for the next 20 overs with the priority clearly being to ensure no more wickets fall before Lunch. Their plan was undone when Root took off from the non-striker's end for a quick single after Burns played a delivery from Rahkeem Cornwall towards third man.

Roston Chase threw the ball at the wicketkeeper's end and ended up taking off the bail. The direct hit meant that the England captain had to depart on 17 off 59 balls. Burns ended the over with a four after Stokes got off the mark with a single off the second ball he faced. The pair then saw off the next five overs to take England to Lunch with eight wickets in hand.

West Indies fast bowler Shannon Gabriel could not complete his fourth over, pulling up short after bowling the second ball and Roach came in to the finish it off. Gabriel however came back towards the end of the session to bowl four overs, including the last one of the session.