England pace spearhead James Anderson snared four wickets to leave Pakistan reeling at 41/4 at lunch which was taken early on Day 3 due to rains, in the third Test between the two sides at the Ageas Bowl on Sunday. 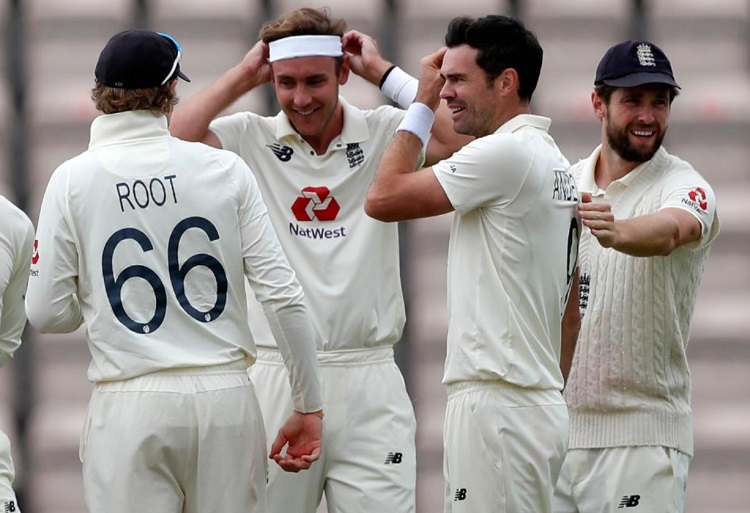 Veteran Anderson added to his three wickets from the second day as he removed Asad Shafiq who was caught at slip by skipper Joe Root for just five runs.

Skipper Azhar Ali was batting on 10 with Fawad Alam for company on 5 when the skies opened up more than half an hour before scheduled lunch time.

Pakistan still trail England by 542 runs. Earlier, England tailenders helped the hosts pile up 583/8d before Anderson knocked off Pakistan's top three towards the end of the second day.

Earlier, Jos Buttler was dismissed by Fawad Alam, who had never bowled before in Test cricket. Looking to steer the ball along the ground, Buttler ended up offering it straight back into the hands of the bowler, thus ending his innings on 152 off 311 balls.

England then managed to squeeze in about 11 overs. Shan Masood was the first to go, falling to James Anderson yet again after making just 4. Masood's opening partner Abid Ali was then caught in the slips in Anderson's very next over after which captain Azhar Ali and Babar Azam stuck around nervously for some time.

Cops To Initiate Action After Fan Breaches Security To Meet…

India vs England: LED Lights Go Off For A Minute,…

Fans Avoiding To Sit At Top Floor Of Narendra Modi…

All You Need To Know About Newly Built And Named…