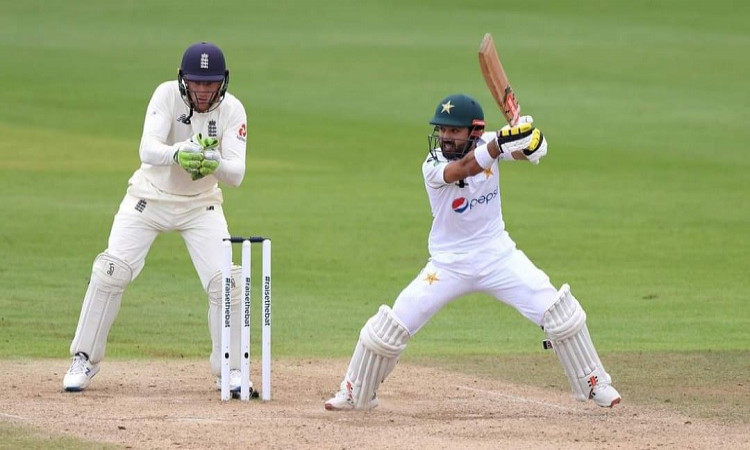 Skipper Azhar Ali scored a gritty unbeaten hundred but Pakistan still remained under the pump at the end of Day 3 of the rain-affected third Test between them and hosts England at the Ageas Bowl on Sunday.

Also Read: Jealous People Critcize IPL As They Get Nothing From It: Sunil Gavaskar

For England, pace spearhead James Anderson returned best figures of 5/56, and could have had atleast three more had catches not been dropped off his bowling.

Wicketkeeper Mohammad Rizwan also scored 53 as he and Ali added 138 runs for the sixth wicket after Pakistan were 75/5 at one stage.

Veteran Anderson added to his three wickets from the second day as he removed Asad Shafiq who was caught at slip by skipper Joe Root for just five runs.

Spinner Dom Bess had left-hander Fawad Alam caught behind by Jos Buttler for 21 before Ali and Rizwan joined hands to steady the ship.

Chris Woakes broke the stand as he dismissed Rizwan and Stuart Broad removed Yasir Shah and Shaheen Shah Afridi with Buttler taking a stunning diving catch behind the stumps to send Afridi back.

Anderson then saw three catches dropped off his bowling in less than two overs but finally got his fifer when Naseem Shah was caught by Dom Sibley at slip.

Earlier, England tailenders helped the hosts pile up 583/8d before Anderson knocked off Pakistan's top three towards the end of the second day.

Buttler was dismissed by Fawad Alam, who had never bowled before in Test cricket. Looking to steer the ball along the ground, Buttler ended up offering it straight back into the hands of the bowler, thus ending his innings on 152 off 311 balls.

England then managed to squeeze in about 11 overs. Shan Masood was the first to go, falling to James Anderson yet again after making just 4. Masood's opening partner Abid Ali was then caught in the slips in Anderson's very next over after which captain Azhar Ali and Babar Azam stuck around nervously for some time.