Southampton, July 10: West Indies ended the second day of the first Test against England on 57/1 and trail the hosts by 147 runs at the Ageas Bowl. After Dom Bess' cameo took England past the 200-run mark, West Indies openers John Campbell and Kraigg Brathwaite put up an opening stand of 43 runs. Campbell was dismissed by James Anderson towards the end of the day and Shai Hope was at the crease with Brathwaite when umpires ended play on Thursday. 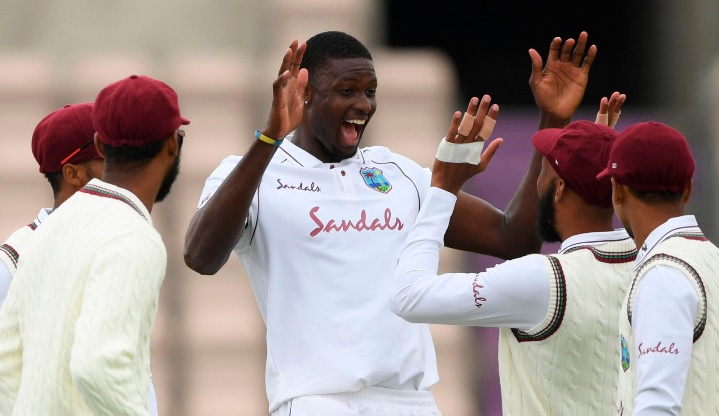 Campbell continued West Indies' good run with the reviews early on. He successfully overturned two LBW decisions that went against him. However, it was not a case of third time lucky for him as Anderson trapped him in front of leg stump four balls after Campbell had successfully reviewed the second decision.

Hope and Brathwaite however saw off Anderson, Mark Wood and later Ben Stokes before the umpires led the players back due to bad light. About 40 minutes later early stumps was declared for the second consecutive time in the Test.

West Indies captain Jason Holder was the star of the day as his six wickets earlier in the day helped the visitors bundle out England for 204 in the first two sessions of the day.

England skipper Ben Stokes was the highest scorer for his side with 43 runs on board and his 67-run stand with Jos Buttler was the only time in the innings that England looked to be on top.

The pair started the second session of Day 2 with England on 106/5. They played some counter attacking cricket to reply to the West Indies who largely dominated proceedings in the first session.

The partnership was finally broken by Holder when he forced a nick off Stokes and the ball flew into the gloves of wicketkeeper Shane Dowrich. In his very next over, Holder got a nick off Buttler and Dowrich dived to his right to complete a one-handed catch. Buttler finished with 35 off 57 deliveries.

Dom Bess batted as much as he could with the tail which was wiped away by Holder and Shannon Gabriel.