Southampton, July 9:  West Indies captain Jason Holder was the star of the day on Thursday as his six wickets helped the visitors bundle out England for 204 in the first innings of the first Test between the two sides at the Ageas Bowl in Southampton. 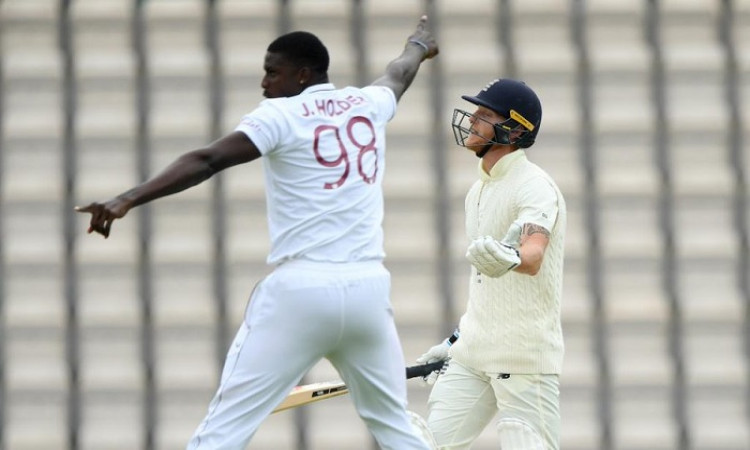 England skipper Ben Stokes was the highest scorer for his side with 43 runs on board and his 67-run stand with Jos Buttler was the only time in the innings that England looked to be on top.

The pair started the second session of Day 2 with England on 106/5. They played some counter attacking cricket to reply to the West Indies who largely dominated proceedings in the first session.

The partnership was finally broken by Holder when he forced a nick off Stokes and the ball flew into the gloves of wicketkeeper Shane Dowrich. In his very next over, Holder got a nick off Buttler and Dowrich dived to his right to complete a one-handed catch. Buttler finished with 35 off 57 deliveries.

Dom Bess batted as much as he could with the tail which was wiped away by Holder and Shannon Gabriel. Holder got another review on the money as umpire Richard Kettleborough turned down his appeal for an LBW against Jofra Archer. The third umpire asked Kettleborough to reverse his decision after the replays showed three reds and Holder got his fifth wicket.

Mark Wood then edged the ball to gully to become the sixth man to fall to Holder after which Gabriel dismissed James Anderson to pick his fourth wicket. Bess was unbeaten on 31 off 44 deliveries. He hit consecutive fours off Kemar Roach to push England past the 200-mark before Gabriel dismissed Anderson.