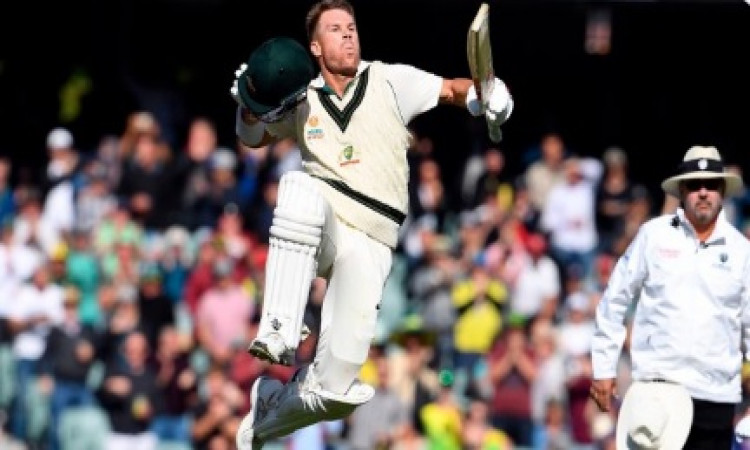 Adelaide, Nov 30 .Australia left Pakistan reeling at 96/6 as Mitchell Starc picked four wickets on a day when opener David Warner sent the records tumbling with a stunning triple ton at the Adelaide Oval. Australia declared on 589/3 and Pakistan trail by 493 runs with just four wickets in hand. Babar Azam held fort with an unbeaten 43 off 67 balls at stumps.

Earlier, Warner was unbeaten on 335 off 418 balls, which is the second highest score in a Test innings by an Australian batsman. He is the seventh Australian to have scored a triple ton and shared a record 361-run stand for the second wicket with Marnus Labuschagne (162).

Also Read: Clueless how to take wickets on these tracks: Akhtar on Pak bowlers

Warner then put up a 121-run stand with Steve Smith, who became the fastest to 7000 Test runs in terms of innings played. Warner went past the 300-run mark during a 99-run stand with Matthew Wade.

Australia did not take long to take the first Pakistani wicket after declaration. Mitchell Starc snared a nick from Imam-ul-Haq in the fifth over which flew to Warner at gully and Pakistan lost their first wicket for just three runs. Captain Azhar Ali was the next to fall, nicking to Smith at first slip off Pat Cummins in the 12th over.

Four overs later, Shan Masood edged to Tim Paine off Josh Hazlewood. Starc then picked the wickets of Iftikhar Ahmed and Mohammad Rizwan in the 32nd over.