Pune, Dec 19 (Cricketnmore) Delhi thrashed Bengal by an innings and 26 runs within three days to storm into the final of the Ranji Trophy 2017-18 at the Maharashtra Cricket Association Stadium here on Tuesday. 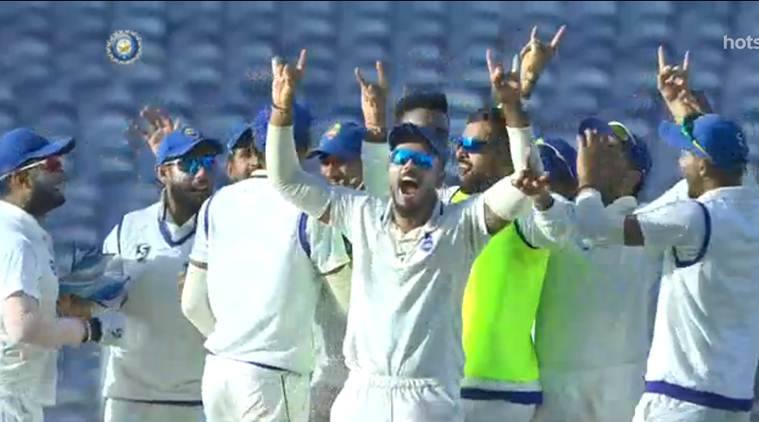 Pacers Navdeep Saini (4/35) and Kulwant Khejroliya (4/40) wrecked havoc in Bengal's second innings, sharing eight wickets between them to bundle the opposition out for a paltry 86.

After conceding a crucial 112-run lead in the first innings, Bengal were off to a forgettable start losing their top five wickets for mere 44 runs on the board.

Vice captain Sudip Chatterjee (21), skipper Manoj Tiwary (14) and stumper Shreevats Goswami (17) managed to get the starts but failed to convert when the team needed the most even as Bengal lost their remaining five wickets within a span of 42 runs.

Delhi managed to get the early breakthrough with the wicket of opener Abhishek Raman (0), thanks to pacer Vikas Tokas trapping him plumb in front.

Abhimanyu Easwaran (13) and Sudip then started rebuilding the innings with a brief 27-run second wicket stand -- the highest for Bengal in their second essay before Khejroliya struck with the wicket of the opener.

Thereafter, it was one way traffic for the Delhi boys, as wickets began to tumble at regular intervals.

Earlier, India's red ball specialist Mohammed Shami snared six wickets to apply the brakes on Delhi, who resumed at their overnight score of 271/3 and went on to add 127 runs to their total.

For Delhi, Himmat Singh contributed with a valuable 60 on Tuesday after twin centuries from openers Gautam Gambhir (127) and Kunal Chandela (113) set the tone for a grand first innings total.

After a dominating performance in the semi-final against Bengal, Delhi make their way in to the @paytm #RanjiTrophy 2017-18 Final pic.twitter.com/jxwLPuRI5Y