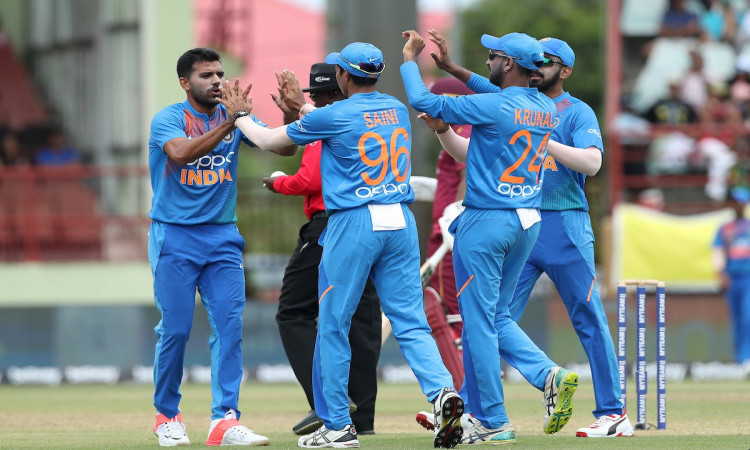 Guyana, Aug 6: West Indies finished their innings on 146/6 in the third and final T20I of their series against India in Guyana. Kieron Pollard was their highest scorer with 58 runs off 45 balls while Deepak Chahar took three wickets on his T20I debut.

Deepak wiped out top order batsmen Evin Lewis, Sunil Narine and Shimron Hetmyer in the first four overs. Pollard and Nicholas Pooran then got the hosts' innings back on track with a 66-run stand for the fourth wicket.

While Pooran fell after nicking to the wicketkeeper Rishabh Pant off Navdeep Saini, Pollard went on to complete his first T20I century in seven years. Saini managed to deceive him with a slower ball in the 16th over and Pollard lost his middle stump with West Indies still a fair distance from posting a competitive total. Carlos Brathwaite and Rovman Powell then saw West Indies through to the end.

Earlier, Indian captain Virat Kohli said that Rohit Sharma has been rested for the match and K.L. Rahul will open the innings in his place. India are looking for a clean sweep, having already taken an unassailable 2-0 lead in the series.