Day-Night Test: Pakistan on verge of series defeat against Australia 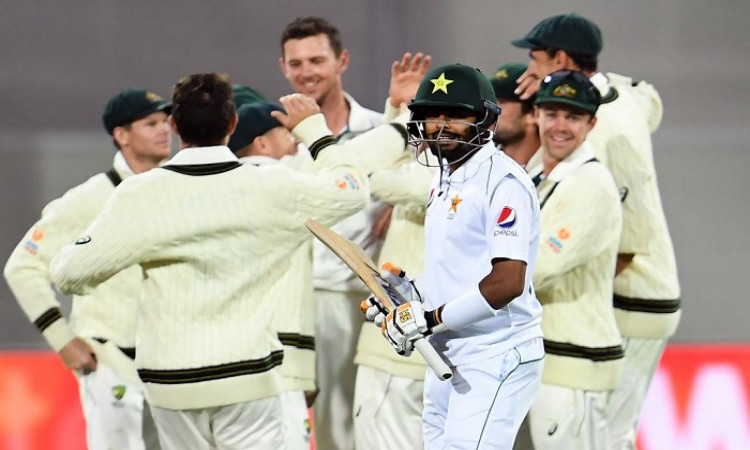 Adelaide, Dec 1: Pakistan would hope for a miracle if they want to avoid a series whitewash against Australia as the Green Brigade were trailing by 248 runs with seven wickets in hand in their second innings before rain fored an early draw of stumps on Day 3 of the second and final Test here on Sunday.

Opener Shan Masood and Asad Shafiq were batting on 14 and 8, respectively, with Pakistan reeling at 39/3 in the second innings with six sessions of play still remaining in the day-night Test.

In reply to the hosts' massive first innings total of 589/3, the visitors were once reeling at 89/6 in the first innings before Babar Azam and Yasir Shah came together for a rescue operation, showing great grit and determination to share a crucial 105-run stand seventh wicket.

While Babar missed out on a century by just three runs, Shah went on to slam his maiden Test ton, scoring 113 off 213 balls (4x13) to help Pakistan avoid an early all out.

After Babar was dismissed by Mitchell Starc, Shah kept the fight going as he shared an 87-run stand for the ninth wicket with Mohammad Abbas (29).

Starc (6/66) starred for the hosts as he helped his side bundle out Pakistan for 302 in the first innings.

After Australia enforced follow-on, Pakistan again got off to a poor start and were reeling at 39/3 when stumps were drawn. More importantly, they have lost their star batsman Babar, who could only manage eight runs in the second innings.

Australia had won the first Test by an innings and five runs.