Kolkata, Nov 20:  Picking the pink ball after it crosses the batsman is a challenge wicket-keeper Wriddhiman Saha is looking to tackle when India take on Bangladesh in the first-ever Day-Night Test at Eden Gardens from Friday. 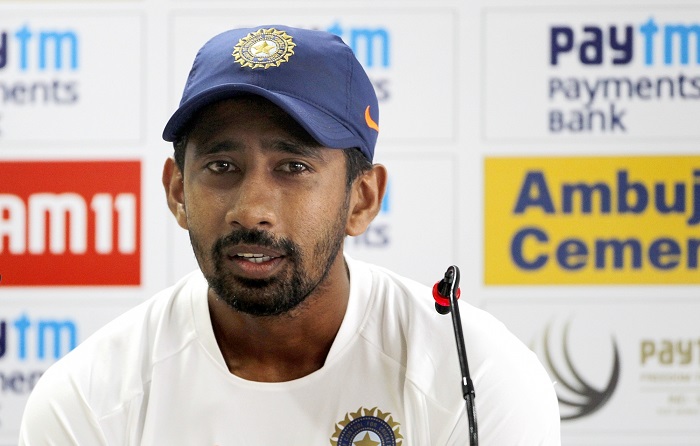 The pink ball, as opposed to the traditional red one, has more lacquer for better visibility, especially during twilight. The extra coating of lacquer is expected to make the ball wobble more which in twilight could be a problem for the stumper to pick.

Asked what would be the challenge as a wicket-keeper in pink ball Test, Saha said: "Picking the ball is challenging. If it is challenging for slips, it is for me as well as I stand beside them. The ball wobbles as our pacers bowl. That could be a factor but I have to accept the challenges. We are professionals."

Saha has first-hand experience of day-night cricket with pink ball when local giants Mohun Bagan and Bhowanipore Club played the Cricket Association of Bengal (CAB)'s Super League final at the Eden in 2016.

"Condition wise, twilight time will be challenging, especially picking the ball. We have to adjust. The ball is new, it might help pacers. It can be challenging for the batters," Saha said.

The Indian pacers fired in unison with Mohammed Shami taking seven wickets in the match to help India win by an innings and 130 runs.

Asked how effective the trio of Shami, Umesh Yadav and Ishant Sharma would be with the pink ball which is expected to assist them more, Saha said such has been their form that irrespective of ball or conditions they will shine.

"Pink or red, he (Shami) would have same impact. Shami has done well in recent matches. In any condition he does well. In Ranchi and the last game (he did so well). He gets the ball to reverse swing and with pace. The (colour) of the ball won't matter, he will deliver and trouble the batsman."

Saha also spoke about the hype surrounding the Day-Night Test being "different" to a day affair with a packed house expected on the first four days.

"The thrill is different when a Test match is watched by a packed house. We are hearing that tickets are sold out," said the local boy who was not in Indore when India practiced under lights after the first Test got over in three days.

"I was not in the Indore session with the pink ball. I came home for personal reasons."

Saha said although India has more experience playing with the pink ball as some players took part in the 2016-17 Duleep Trophy as opposed to Bangladesh, match situation would be totally different with twilight period and possible dew being the challenges.

"We have more experience with the pink ball, but with twilight period coming into play and considering dew factor, we have to apply ourselves on the ground," the 34-year old said.

He was also quizzed about players' body clock changing with the day starting at 1 p.m.

"It is different to Test matches. But it won't make a big difference or affect preparation. We have team members who have dinner at 6:30-7:30 but there will be breaks. Most of the players play one-day cricket, then IPL also takes place so everybody knows how to adjust. We are all excited to represent India for the first D/N Test."