Cried like a child after Faulkner hit me for 30 runs, says Ishant Sharma 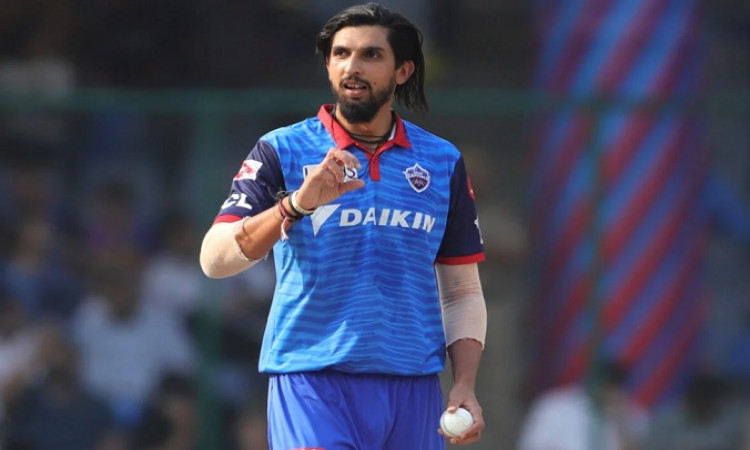 New Delhi, Aug 5:  Leading Indian pacer Ishant Sharma wants to make a comeback in the 50-overs cricket and wishes to be a part of the World Cup team.

World Cups have been jinxed for Ishant. He did not play 2011, 2015 and 2019 World Cup for various reasons. "I would love to play in a World Cup. Actually, I want to be part of a World Cup-winning team," said Ishant while speaking in the latest episode of ESPNcricinfo Cricketbaazi.

"We are playing the World Test Championship, which is equivalent to a World Cup in Test cricket, but not a lot of people follow it while an ODI World Cup is widely followed. So, hopefully...let's see."

Ishant is amongst the few bowlers who got a chance to play for India after only one year of first-class cricket.
However, unlike other fast bowlers who usually start well and then taper off as their career progresses, Ishant's career trajectory has been the opposite.

"In 2011, I was a regular in the ODI team but was dropped from the team and the World Cup that year. I didn't know the reason. Gary Kirsten was the Indian coach at the time and he realised something was wrong with me."

"I told him I was fine, but he refused to believe me since he wasn't seeing a smile on my face. I have always considered cricket to be my life. If I performed well, I'd be happy, if not, I'd be sad. Then everyone, including Gary Kirsten, explained to me that cricket was not my entire life, but only a part of it."

He added, "The turning point of my life came in 2013 when James Faulkner at the Mohali ODI hit me for 30 runs in one over and lead Australia to the victory. I felt I had betrayed myself and my country. I didn't speak to anyone for two-three weeks.

"Although I am a tough guy, I cried. I called my girlfriend and cried over phone like a child. I stopped eating, I couldn't sleep or focus on anything else. I would switch on the television and find people criticising me, which messed me up even more.

"But then this incident was like a blessing in disguise. Sometimes you need a jolt like this to understand your passion. Before the Faulkner episode, if I had a bad performance, people would come and tell me it's okay, it happens. But after 2013, I started taking responsibility for my actions. And when you start taking responsibility for your actions, you play every match to win it for the team."

Ishant further said that former skipper MS Dhoni always backed him and never looked for a replacement. "MS Dhoni always backed me. Even after my first 50-60 Tests, he never looked for a replacement. Till date I don't understand averages and strike rates! I've never bothered about these figures. And if I dont understand them, why should I rely on them?

"If I am bowling in India and the captain asks me to try not to concede runs and leave picking wickets to spinners, I'll do it. It doesn't matter to me that my bowling average is around 37. My communication will be with my captain and that's why Dhoni backed me."

Ishant's bowling went through changes after his county stint with Sussex in 2018 where he said he learnt a lot with Jason Gillespie.

The right-arm fast bowler has played under six captains, but largely under Dhoni and Virat Kohli. When compared his numbers under both of them, there is a difference.

Explaining if the difference is because he has matured now or because of his role in the team, Ishant said, "It's not that my role is any different now. When I played under Dhoni, we played a lot in India as compared to overseas, where you bowl more and can pick up more wickets."

"Under Kohli, we have had more away tours. I have, in particular, played in very few home matches under Kohli. The only difference I see is that earlier I was very aggressive. So Dhoni would ask me to calm down. he would often say, "If you get a ban, who will bowl?"

"With Virat, it's different. He says, "Just don't get a ban. Other than that, do what you want to and I'll take care of the rest!" There is really no major difference between them. The best thing about them is that they never made me feel insecure about my place in the team. This is a very important aspect in a team sport."

He added, "I made my debut under Dhoni, who was part of a star-studded team and had an aura about himself too. I got comfortable talking to Dhoni only around 2012-13. Before that I would talk to him on the ground but not much off the field.

"Virat and I have been playing together since childhood. We've shared rooms and meals in our early years. So I am comfortable talking to him. With Dhoni, that happened post 2012, and lot changed after that."

Ishant has been part of the Indian team for 12-13 years and has seen one set of players leave and another one join. He has played with Zaheer Khan, RP Singh, Irfan Pathan, Sreesanth and Praveen Kumar in past. And now there are Shami, Bhuvneshwar Kumar and Umesh Yadav which is also hailed as India's best-ever fast-bowling group.

Commenting on the difference, the 32-year-old said, "My communication is better with the current lot of pace bowlers. Communicating on the ground does not count as it is part of your work. Communication improves when you start talking off the field as it helps build trust."

"When I came into the team, there were so many stars around that I used to be afraid of talking to them. It's not like Zaheer Khan ever refused to share things with me. In fact, whatever I am today is because of Zaheer and what he taught me about reverse swing and bowling with the new ball. But with Zaheer, we never spoke about things off the field."