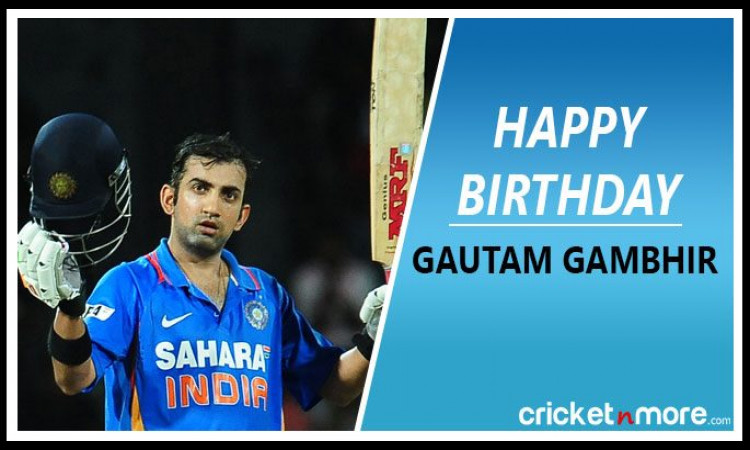 New Delhi, Oct 14: Former India opener Gautam Gambhir turned 38 on Monday and wishes poured in from the cricket fraternity for the left-hander. Gambhir, currently a Member of Parliament, also represented Delhi in the domestic circuit and captained the Kolkata Knight Riders and Delhi Daredevils in the Indian Premier League (IPL) during his cricketing years.

The Board of Control for Cricket in India (BCCI) wished the cricketer in a tweet and also shared a video of the batsman's impressive knock against Sri Lanka in 2009. "Wishing @GautamGambhir a very Happy Birthday ????
Here's a throwback to one of his memorable innings in a run-chase against Sri Lanka in 2009 #HappyBirthdayGautamGambhir," the board's Twitter handle said.

Also Read: At 34, Wriddhiman Saha giving other keepers a run for their money

Indian batsman Cheteshwar Pujara also took to Twitter to wish the former cricketer and said: "Wish you a great birthday @GautamGambhir paaji! May God bless you with lots of success and good health."

"Many more happy returns of the day @GautamGambhir. May you find fulfilment and happiness in all that you do," former India batsman Mohammad Kaif tweeted with an image of himself with the birthday boy.

"Wish you a very happy birthday Gauti bhai @GautamGambhir. May you continue to make a difference in millions of lives & lots of success come your way!," cricketer Suresh Raina tweeted sharing a picture of his family with Gambhir's.

Gambhir had received the Padma Shri from the government, the fourth highest civilian award in India. In December 2018, he announced his retirement from all forms of cricket.