Melbourne, March 29 (CRICKETNMORE): Cricket Australia (CA) on Wednesday congratulated its Test team for the quality performance during the recently concluded four-match Test series against India. Commentator Harsha Bhogle all but confirmed to return on air for IPL 10 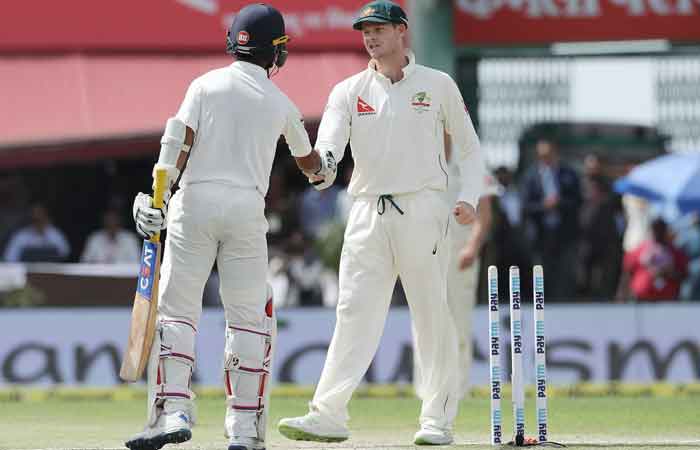 Australia thrashed the hosts in the first Test match at Pune by 333 runs and then lost the second match in Bengaluru by 75 runs.

The third match, which was played in Ranchi, was a dull day with series tied at 1-1. In the fourth and final test match in Dharamsala, India defeated Australia by eight wickets to clinch the Test series 2-1 and regained the Border-Gavaskar Trophy.

congratulating the team, CA Chairman David Peever said: "As the team arrives home over the next two days, they will find that all of Australia is immensely proud of their efforts. Some gave them little chance of testing the world's number one team, but instead showed resilience, adaptability and a determination to overcome the difficulties they have experienced in recent years in such conditions."

"They came very close to winning the series, but did achieve Australia's first Test win in India since 2004. There were many fine individual performances, but none better than those of the captain. Steve showed yet again what an outstanding leader he is becoming, and his honesty and gracious comments at the end demonstrated the qualities that Australians expect from their Test captain.

"Credit must also be given to the Bupa Support Team staff, who helped the squad prepare so well in Dubai, and then guided them through the lengthy visit," he added.

Peever also said that the Indian tour was tough as they expected and players delivered their best.

"It was a tough series, as we expected and indeed welcome from our Indian hosts. Cricket at this level is highly competitive, and it is incumbent on all involved, players and administrators, to honour the protocols and standards of behaviour that underpin the spirit of cricket," Peever said.

"As a result of this series, and the series just completed in New Zealand, Australia has finished as the number 3 ranked Test team for this international season. We aspire to be number one in all formats, so while the team's efforts in India, and across the summer following the disappointment of the first two Tests against South Africa, represent a significant improvement, we all know that we must continue to learn and develop our skills.

We want to win major trophies, like the Ashes and the Border Gavaskar, not just at home but overseas as well. Our players will now take a well-earned break, before we look forward to the ICC Champions Trophy in England," Peever concluded.

Congrats to India on the victory and what a Test series! One to remember.https://t.co/1HG79qHddv #INDvAUS pic.twitter.com/vDNN7bIPIm