Dubai, Nov 6:  Cricket is considered a religion not just in the Asian sub-continent and that was once again evident from a picture where a newly married Pakistani couple was busy following the second T20I game between Australia and Pakistan on their television set in the US on Tuesday. 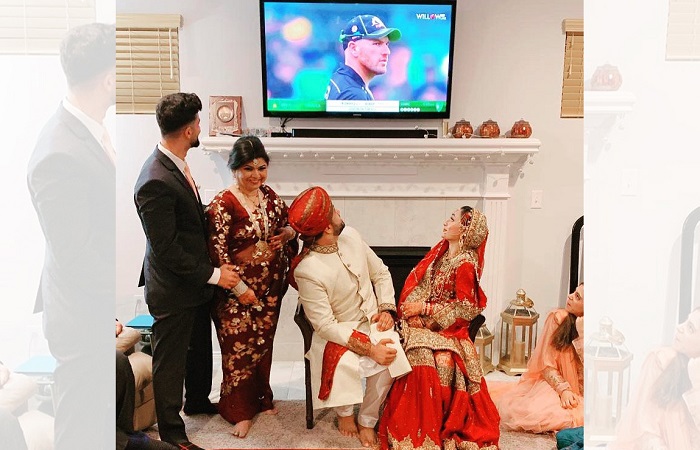 With the image going viral on social media, ICC also took note of it and shared the picture on its official twitter handle. "Here's a message we got from a fan in the US. #CoupleGoals You know it's love when ...," the ICC captioned the image with a letter from the groom.

The groom's message read: "As a die-hard cricket fan, I want to submit a photo from my wedding this past weekend. As per tradition, after the completion of wedding, the bride is bought home for a little traditional ceremony amongst the close family. As we came home (around midnight in Detroit, Michigan, USA) the Pakistan vs Australia T20 game was getting underway. Over the years residing in North America I've stayed up at all sorts of odd hours in night to catch team Pakistan play. Even though it was my wedding night, I wasn't going to miss this game."

The Green Brigade is currently touring Australia where they lost the second match of the three-match T20I series by seven wickets, thanks to Steven Smith's unbeaten 51-ball 80 run knock. The two sides will now face off in the third and final affair on Friday.