Bengaluru, Jan 28 (CRICKETNMORE): India Test star Cheteshwar Pujara's unbeaten 131 powered Saurashtra to their third Ranji Trophy final after they earned a hard-fought five-wicket win against Karnataka in the semi-final at the M.Chinnaswamy Stadium here on Monday. 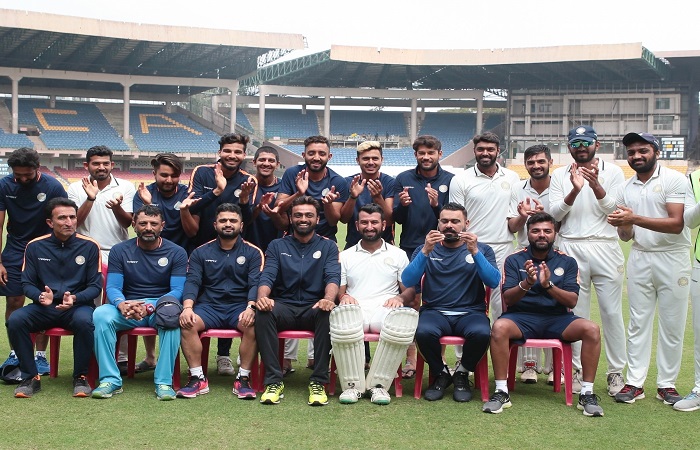 Chasing 279, Pujara anchored Saurashtra's innings with the assistance of Sheldon Jackson, who struck a defiant 100 after the visitors found themselves tottering at a precarious 23/3 on Day 4.

Needing another 55 runs with seven wickets still in the shed on the fifth and final morning, Pujara and Jackson carried on from where they left on Sunday as the fourth wicket stand flourished to 214 runs, with Jackson also reaching the three figure mark.

Just when the duo looked set to guide the side to a comfortable win, Karnataka's veteran pacer Vinay Kumar broke through Jackson's defences, raising hopes for the home side.

Ronit More then dented Saurashtra further with the wicket of new man Aarpit Vasavada (12), who, however hung around for brief 37-run fifth wicket stand with Pujara.

With the tourists within sniffing distance of a win, the 23-year-old Prerak Mankad (4 not out) hit the winning run with a single off More before celebrating the win by hugging Pujara.

Saurashtra now will face the defending champions, Vidarbha, in the summit clash at the Vidarbha Cricket Association Stadium in Nagpur.