Chennai, March 5:  Chennai Super Kings (CSK) just cannot get enough of MS Dhoni and Suresh Raina. With the star pair's training in full swing ahead of the upcoming season of the Indian Premier League (IPL) with both making their comebacks, the franchise shared a photo of both on social media. 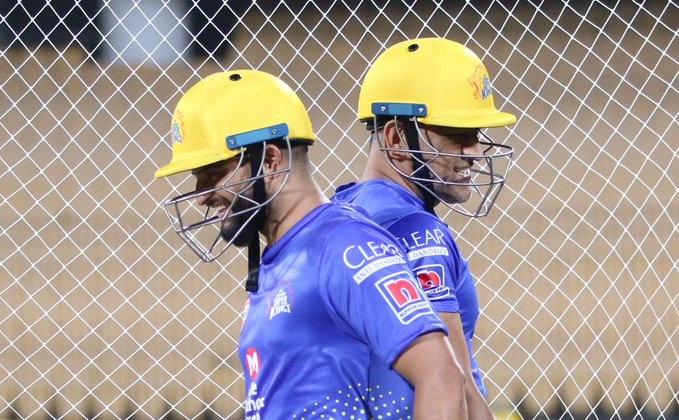 "Three and Seven making a perfect ten together, now and always," CSK said in a tweet on Thursday with the photo of the duo sharing a light moment with their helmets on.

India's decorated former captain Dhoni will be seen on the cricket pitch for the first time since the semi-final of the 2019 ICC World Cup.

The IPL will also see the return of Raina whose last international game was in July 2018 in an ODI match against England at Headingley.

He however remains an integral part of the CSK squad and one of the all time greats in the history of the IPL. With 5368 runs at an average of 33.34, Raina is only behind India and Royal Challengers Bangalore captain Virat Kohli in the all-time highest run scorer list of the tournament. Raina is also second in the list of most IPL fifties of all time with 38.

The other day, three-time winners CSK tweeted a video of Raina returning to the camp and greeting Dhoni and the rest of the players. "Me3t and Gree7 - Everyday is Karthigai in our House, a film by Vikraman Sir," said the three-time IPL winners in the tweet.

India's chinaman spinner Kuldeep Yadav on Thursday said the experience that Dhoni brings is being missed in the Indian team.

"Mahi bhai obviously brings a lot of experience with him and he has given the Indian team a lot. So when a player like that is not playing of course you miss him. They (Rahul and Pant) are young and are doing well. Both are keeping well so it has not made too much of a difference, but yes, you do miss his presence," Kuldeep told select reporters on Thursday on the sidelines of the Times of India Sports Awards.

CSK will start their IPL 2020 campaign against defending champions Mumbai Indians on March 29 at the Wankhede Stadium in what will be a repeat of last year's final.