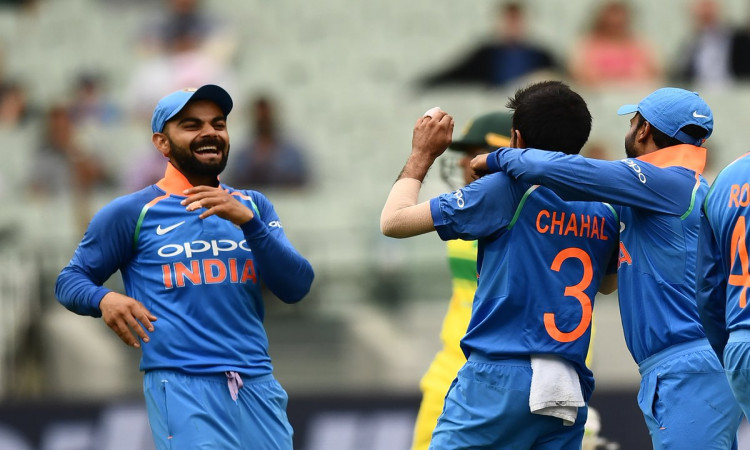 Melbourne, Jan 18 (CRICKETNMORE): Australia's vulnerability to quality leg-spin was exposed by Yuzvendra Chahal, who returned with his second overseas fifer to help India restrict the hosts for a megre 230 in the series-deciding third ODI at the Melbourne Cricket Ground (MCG) here on Friday.

Playing his first match of the series, Chahal wrecked havoc in the Australian line-up, returning a career-best 6/42 as the home batsmen seemed to have no clue playing the leggie.

Also Read: Melbourne ODI: Australia bowled out for 230 against India

Australia's top order conundrum, especially the off-colour opening duo of skipper Aaron Finch (14) and his deputy Alex Carey (5), continued to hurt them even though contributions from the middle order gave their bowlers something to defend.

After pacer Bhuvneshwar Kumar got rid of the openers and reduced the hosts for 27/2, Chahal ripped through the middle order, taking the crucial wickets of the in-form Shaun Marsh (39) and Usman Khawaja (34) in his very first over.

His sixth victim was his opposite number in the Aussie camp Adam Zampa (3).

Pacer Mohammed Shami also contributed with the wickets of the dangerous Glenn Maxwell (26) and the tailender Billy Stanlake for a duck as the Aussie innings folded in 48.4 overs.

Earlier, after being put in to bat with rain interrupting the very first over, Australia had themselves to blame for the lack of application of the openers against an in-form Bhuvneshwar.

While Finch tried hard to get the rust off his willow, Carey was dismissed defending a shortish delivery bringing Marsh and Khawaja together for rebuilding the ship.

Marsh and Khawaja repeated their act of the second ODI, by putting up a 73-run third wicket stand before Chahal was employed by Virat Kohli.

The leg-spinner responded in style dismissing both the set batsmen in a span of two deliveries, with Marsh brilliantly stumped by Mahendra Singh Dhoni off a wide delivery while Khawaja falling to a simple caught and bowled chance.

The rest of the batsmen, barring Handscomb, too failed to read Chahal's trajectory but the leg-spinner had the final laugh getting rid of the right-hander, who faced 63 balls and struck two fours.