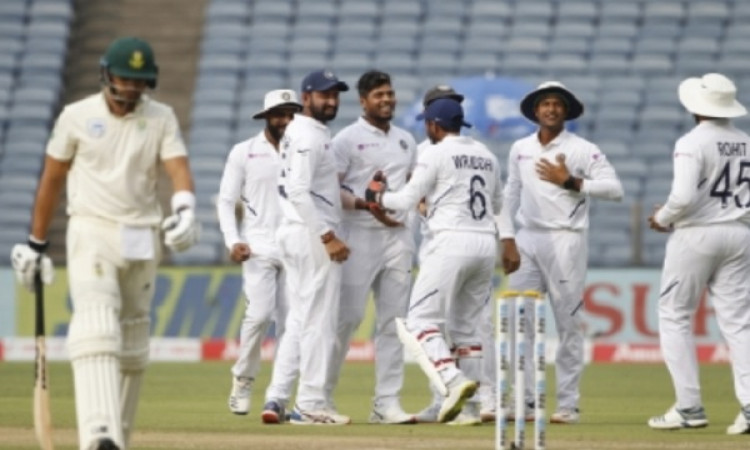 Pune, Oct 12  Indian bowlers continued with their dominant performance by picking up three wickets in the morning session on Day 3 to help the hosts extended their control in the ongoing second Test against South Africa.

At Lunch on Saturday, the Proteas scoreline read 136/6, having Faf du Plessis and Senuran Muthusamy batting on 52 and 6 respectively, at the Maharashtra Cricket Association (MCA) Stadium. The visitors still trail by 465 runs.

Starting the day at 36/3, South Africa lost both their overnight batsmen Anrich Nortje (3) and Theunis de Bruyn (30) in the first hour of the play.

Nortje, who came in as a night-watchman on Friday evening, was the first wicket to fall as he was caught brilliantly at fourth slip by Virat Kohli off the bowling of Mohammed Shami.

Three overs later, de Bruyn played a loose shot and in the process got a thick-outside edge against Umesh Yadav. Wicketkeeper Wriddhiman Saha dived to his right and took a stunning catch to end de Bruyn's inning.

Quinton de Kock and du Plessis then tried to steady the ship for the visitors and shared a crucial 58-run stand before de Kock was bowled by ace off-spinner Ravichandran Ashwin at his individual score of 31.

Muthusamy then joined forces with his skipper and made sure their team didn't lose any further wickets till the end of the session. In the process, du Plessis also reached the 50-run mark and is looking good to get a big one.

Earlier on Day 2, India had declared their first innings for 601/5 with Virat Kohli (254*), Mayank Agarwal (108) and Ravindra Jadeja (91) being the chief contributors.