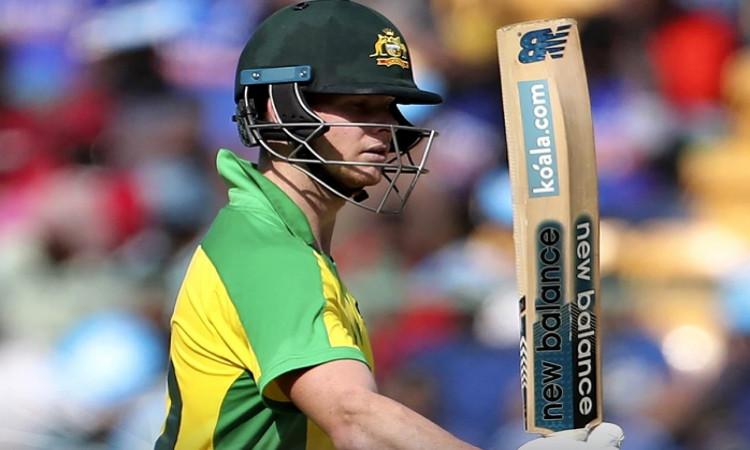 Bengaluru, Jan 19:  Steve Smith slammed a magnificient century as Australia put up 286/9 in 50 overs against India in the third and series-deciding final one day international here on Sunday.

Former captain Smith brought up his ninth 100 in 117 balls, third against India and got out on 131 from 132 deliveries as he tried to change gears and was caught at deep midwicket by Shyreyas Iyer off Mohammed Shami who was India's best bowler.

Smith had hit 14 fours and a six in his innings.

Despite restricting Australia to a score below 300 on what is generally a batsman-friendly track in Bengaluru, India had given away as many as 27 extras.

Shami (4/63) came back for his second spell in the end and picked up four wickets to shave off Australia's tail and rein in on their scoring to not allow them to get to 300. Pace spearhead Jasprit Bumrah was brilliant too although he went wicketless, giving away just 38 runs in 10 overs.

Besides Smith, fast-rising Marnus Labuschagne notched up his maiden ODI fifty as he scored 54 from 64 balls (5x4).

Smith and Labuschagne shared a 127-run stand for the third wicket which formed the visitors' bedrock after electing to bat first.

India were dealt a blow early on as senior opener Shikhar Dhawan had to go for an x-ray with a call on whether he will take any further part to be taken once he is assessed.

India made early inroads as Mohammed Shami found David Warner's outside edge to wicketkeeper K.L. Rahul who was played ahead of fit-again Rishabh Pant. Warner was gone for just three with his captain Finch (19) following suit soon, albeit in frustrating manner as he was run out due to indecision on Smith's part while taking a single in the 9th over.

A livid Finch stormed out of the ground with the visitors in a spot of bother at 46/2.

But as has been the case so often of late in Test cricket, Smith and Labuschagne joined hands to bring the team on track.

Similar in their playing style, the pair used square of the wicket a lot to score runs and punished the bad ball although Labuschagne was lucky not to get run out after Kuldeep Yadav failed to collect a Yuzvendra Chahal throw from the deep.

Smith got to 53 in 63 balls as he looked as consistent as ever with Labuschagne also notching up his maiden half century in 50-over cricket as he got to 53 in 60 deliveries.

It took a breathtaking catch from Indian captain Virat Kohli to break the stand as Labuschagne looked to accelerate in the 32nd over. The 25-year old played an inside out drive off Ravindra Jadeja which Kohli plucked inches off the grass diving low to his right.

Mitchell Starc was sent to bat at No.5 in a bid to up the ante and score briskly, but the experiment failed as Jadeja had him caught at deep mid-wicket fence by substitute Chahal to complete a two-wicket maiden 32nd over.

Alex Carey (35) and Smith associated for a quickfire 58-run partnership before Kuldeep got a timely breakthrough as Carey holed out to Shreyas Iyer at deep cover.

Bumrah followed it up with a near-perfect 43rd over, just conceding one run off the final delivery as Ashton Turner huffed and puffed at the crease.

Smith brought up his hundred by running a Navdeep Saini delivery down to third man but his celebration said it all as the Aussies fell behind in their run-scoring with Turner struggling to eventually get out caught behind in the same over.

Shami then removed Smith, Pat Cummins (0) and Adam Zampa (1) with toe-crushing yorkers as India ended on a high. Ashton Agar was not out on 11.

Australia made one change to the side, bringing in Josh Hazlewood for Kane Richardson while India named the same team.