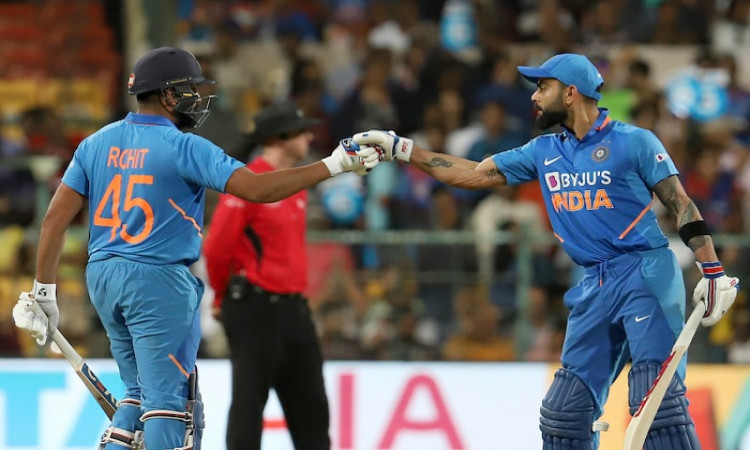 Bengaluru, Jan 19:  India vice-captain Rohit Sharma brought up his eighth century against Australia in dominating fashion as he matched skipper Virat Kohli who also has the same number of hundreds against the same opposition, in the series-deciding third ODI here on Sunday.

Batting legend Sachin Tendulkar has the most number of hundreds (9) against Australia in the 50-over format.

Chasing 287 for victory, Rohit was at it from the get-go, hitting the likes of Pat Cummins and Mitchell Starc with relative ease and scoring at brisk pace. On the back of a tremendous 2019, Rohit seemed to be continuing his good form as he smashed his 29th ODI ton by taking a single off Josh Hazlewood in 110 balls.

Rohit was eventually dismissed by Adam Zampa, having made 119 off 128 balls. His innings included eight fours and six sixes.

Kohli also has eight hundreds against the Aussies.

The series is level 1-1 with India having won the second ODI in Rajkot on Friday. They are looking to avoid a second consecutive ODI series defeat at home to Australia.

Rohit also became the third fastest batsman to reach 9,000 ODI runs earlier in the day as India came out to bat.

Rohit needed four runs to get to the landmark and the senior India opener got to it in the final ball of the first over of India's innings to sit behind skipper Virat Kohli and South Africa's AB de Villiers.

Kohli achieved the feat in 194 innings and he is followed by de Villiers (205 innings).

The Aussies rode Steve Smith's 131 to post 286/9 in 50 overs after winning the toss and electing to bat first.