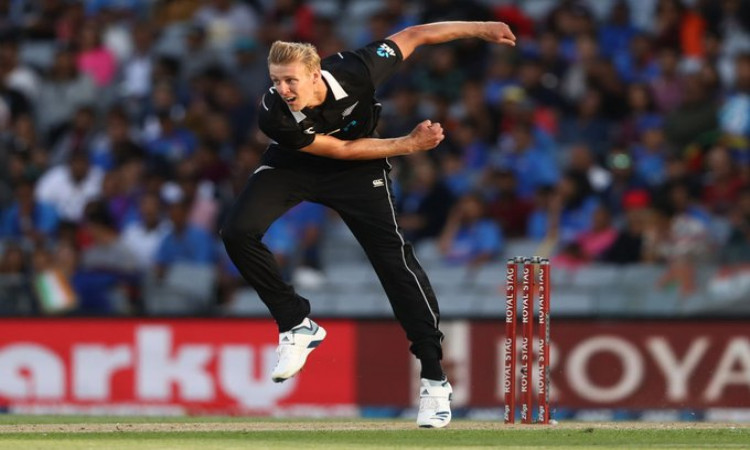 Wellington, Feb 18:  Having earned a maiden Test call-up, New Zealand pacer Kyle Jamieson has revealed that he has worked on his mental game a lot more in recent times since moving from Canterbury to Auckland. The 6'8" pacer made his ODI debut against India in the three-match series and did well as the hosts thrashed the tourists 3-0.

"I was just in a place with my cricket where I wasn't enjoying it and wasn't really liking the person I was in the field sometimes as well," Jamieson was quoted as saying by www.stuff.co.nz.

Also Read: I am not thinking about India call-up: Sarfaraz Khan

"It was just a shift that I needed to make - I thought that, most importantly, I needed to be happy and I needed to enjoy my cricket and then wherever that might take me, it would. It's certainly paid off for me and I'm very happy at the moment. It's been massive for my game and long may it continue."

Jamieson admitted he sometimes found himself questioning his own actions while playing. "I'm a pretty fiery character, I'm pretty aggressive, and I think it just sort of came out in ways that I didn't necessarily like. I'd do it, then post-game be like 'What am I doing that for?'

"There was just a bit of negativity surrounding myself in that environment and that was coming out in my behaviour on the field. I looked at that and said I want to be happy on the field and I want to make sure that I'm getting better every day and getting comfortable with myself, so that regardless of whatever level I play at, I can be happy. The shift up has been massive for that and it's worked out a lot better than I could have imagined," said the 25-year old.

Jamieson added that he had been working with NZ Cricket's mental skills coach, Pete Sanford, over the past four years or so, in order to better understand himself.

"That mental space is such an important part of life, not just as a cricketer, and that's something I'm always tapping into, to keep things in check."

He also said he is looking forward to learn from New Zealand's pace trio of Trent Boult, Tim Southee, and Neil Wagner.

"Those guys are the ultimate professionals in the way that they prepare for a game and do recovery. The difference between domestic and international (cricket) is that there's a lot more pressure on, so you've got to find that balance between having a laugh and enjoying it and still taking it seriously.

"It's something that the whole group in general has got pretty spot on - they're three pretty good guys, and I'd be pretty silly not to try to tap into them."