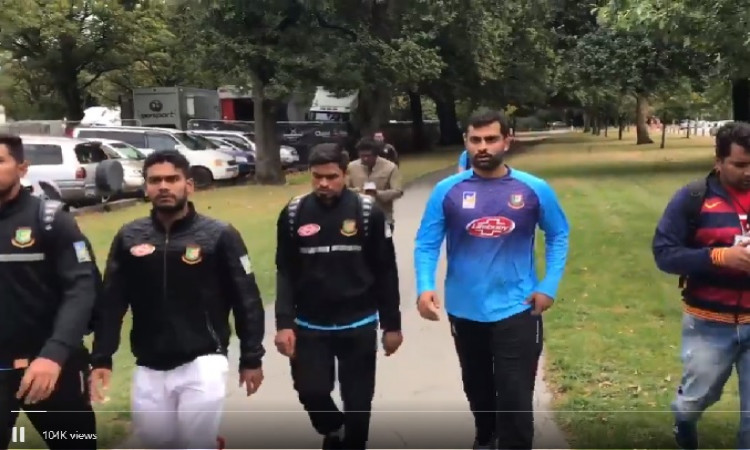 New Delhi, March 15 (CRICKETNMORE):  The Bangladesh cricket team had a devastating experience in Christchurch on Friday when shooters fired at a New Zealand mosque. Even though the players were in the vicinity, they are safe.

The team though is in a state of shock by the turn of events. The players took to social media to inform fans and family of their safety and also asked them to pray for those in the crisis.

An active shooter is at large in Christchurch after attacking the mosque, police said and warned people to avoid the area as all schools and hospitals were put in lockdown.

Bangladesh is set to play New Zealand in Christchurch in the the third Test in the ongoing series and the mosque attack comes on the eve of the Test match.

Witnesses told the media there were several casualties and people were seen running for their lives to escape the shooter.

Test captain Mushfiqur Rahim tweeted: "Alhamdulillah Allah save us today while shooting in Christchurch in the mosque...we are extremely lucky...never want to see this things happen again....pray for us."

Radio New Zealand quoted a witness inside the mosque saying he heard shots fired and "there was blood everywhere".

"Horrified to hear of Christchurch mosque shootings. There is never a justification for that sort of hatred," said Amy Adams, a member of parliament from Christchurch, as reported by CNBC.

New Zealand Police confirmed the incident, calling it a "serious and evolving situation". Police Commissioner Mike Bush said in a statement that authorities had taken one person into custody but there could also be others involved.

"This is an evolving incident and we are working to confirm the facts, however we can confirm there have been a number of fatalities," Bush said.

Bangladesh team escaped from a mosque near Hagley Park where there were active shooters. They ran back through Hagley Park back to the Oval. pic.twitter.com/VtkqSrljjV