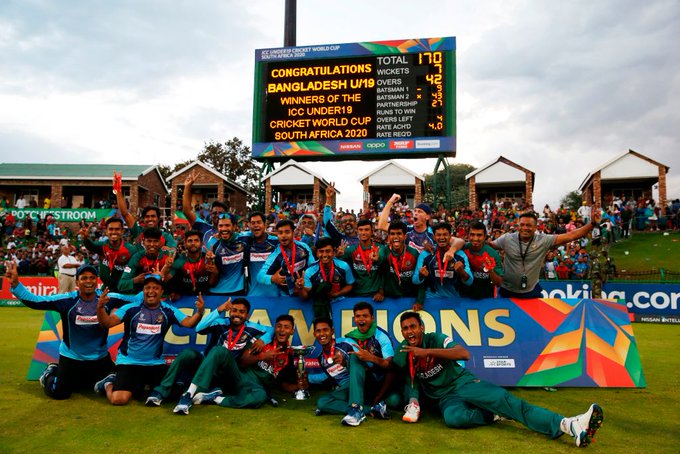 Dhaka, Feb 10:  Bangladesh will accord a warm public reception to the heroes of the ICC Under-19 Cricket World Cup champions.

The Bangladesh cabinet on Monday decided to hold the public reception for the under-19 national cricket team, reports Xinhua news agency.


Stoked and grateful to Sachin Tendulkar for praise: Marnus Labuschagne

Bangladeshi Road, Transport and Bridges Minister Obaidul Quader made the announcement at a press briefing in Dhaka after the cabinet meeting with Prime Minister Sheikh Hasina in the chair.

He said the date of the public reception will be fixed after the return of the World Cup heroes.

Former Bangladesh captain and national selector Habibul Bashar is hopeful that quite a few players from the U-19 World Cup winning team will serve the nation for a long time by breaking into the senior squad.

"This is great for our cricket. We played in the Asia Cup final and failed, same with the Nidahas Trophy final, so we were struggling to cross the final hurdle but the junior team broke the jinx and that too at a World Cup which is a very positive sign for us," Bashar told IANS from Rawalpindi where he is with the senior team that lost to Pakistan by an innings and 44 runs in the first Test of the two-match series.

In a low-scoring summit clash, Bangladesh first bowled India out for a paltry 177 in 47.2 overs and then did well enough to score the revised target of 170 in 42.1 overs under the Duckworth-Lewis method.

The summit clash ended on a controversial note as players of both the teams were seen involved in an altercation. While India skipper Priyam Garg termed it as 'dirty', Akbar apologised on his team's behalf.

"I did not see. I am with the senior team in Rawalpindi. But they are young boys. So, it was exuberance of youth you can say," Bashar said when asked about the incident.