Cape Town, Feb 27:  Australia rode on brilliant performances from the openers as well as spinners to overhaul South Africa in the third and final T20I of the three-match series. David Warner and Aaron Finch combined for a 120-run opening stand before Adam Zampa and Ashton Agar returned combined figures of 5/26 from seven overs to seal a 97-run victory at the Newlands Cricket Ground on Wednesday evening. 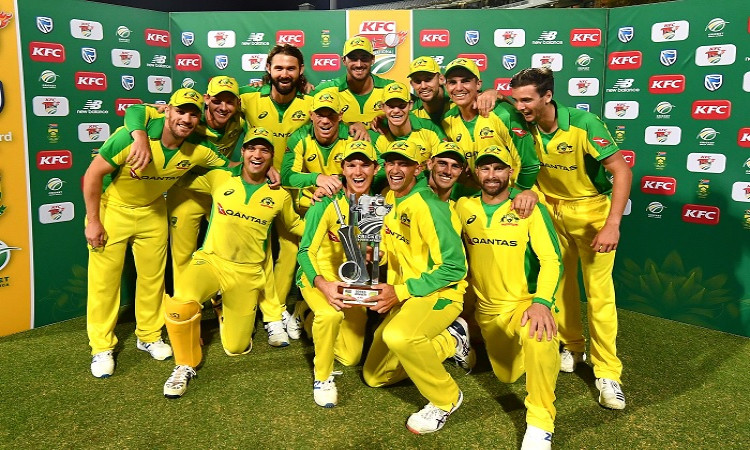 Put in to bat, Warner and Finch got Australia off to a flying start, scoring nine fours and two sixes within the first six overs. By the end of 10 overs, the visitors had scored 114 and both batsmen were still unbeaten having reached their half centuries.

However, within a span of three runs, both Warner (57) and Finch (55) were sent back to the pavilion, thus putting brakes on the scoring rate. Steve Smith then provided Aussies with the finishing touch as he scored 30 off just 15 balls to help the visitors post 193/5.

The Proteas didn't have a good start to their chase as Quinton de Kock was bowled by Mitchell Starc off the third ball of the innings. And the hosts fell further behind the game as Zampa announced himself in the game, holding on to a spiralling outside edge from Faf du Plessis to leave the hosts two down in only the third over.

The leg-spinner played a role in the next three wickets as well, bowling Heinrich Klaasen and Pite van Biljon either side of another fantastic piece of fielding, anticipating Rassie van der Dussen's scoop shot and coming round from short third-man to take a diving catch.

David Miller and Dwaine Pretorius then fell in the space of three balls and thus ended any realistic hopes left for the home side.

Ashton Agar dismissed Nortje and Ngidi with consecutive deliveries, and although Shamsi managed to keep out the hat-trick ball, next over it was all over when Rabada was pinned leg-before by Starc, who finished with figures of 3/22. The hosts were ultimately bowled out for 96 runs in 15.3 overs.