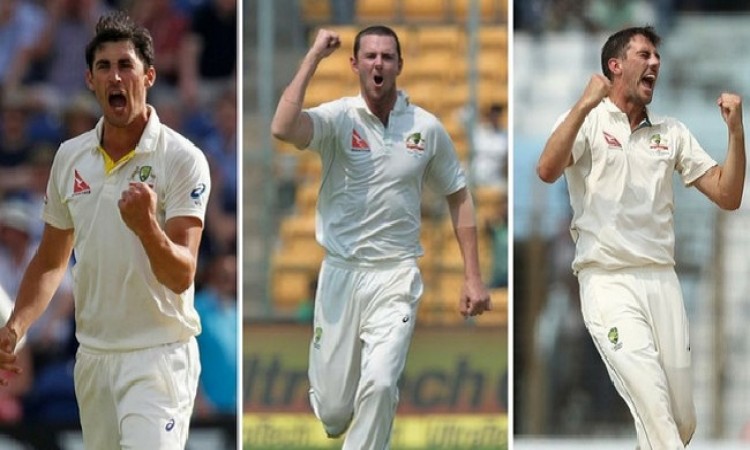 Adelaide, Nov 7 (Cricketnmore) Former Australia quick Ryan Harris, who was one of the architects of England's 0-5 whitewash in the 2013-14 Ashes, feels the current fast bowling trio of Mitchell Starc, Josh Hazlewood and Pat Cummins is more potent.

Harris, who claimed 22 wickets and formed a formidable combination with left-armer Mitchell Johnson and Peter Siddle during the 2013-14 edition, believes it will be the pace attacks of both sides that will decide the course of the series, starting in Brisbane from November 23.

"Hazlewood's probably doing the job that I did (four years ago) and he's quicker than me, and he gets more bounce," Harris said at the Adelaide Oval ahead of the four-day day-night tour game against England that starts on Wednesday.

"And you've got Starc who can definitely do a Johnson role, and you've got Cummins so you've probably got an extra bit of pace. Cummins on his day he's fast as well.

"Obviously we did a good job last time, but the key is going to be working as a team, as a bowling unit. That's what we did well last time and obviously got the results," the 38-year-old added.

While the first Test will be played at the Gabba in Brisbane, the second match will be a day-night affair at Adelaide from December 2-6.

The third Test will be played at the WACA Ground in Perth from December 14-18 while the fourth match will be played on Boxing Day in Melbourne followed by the final Test in Sydney from January 4-8.