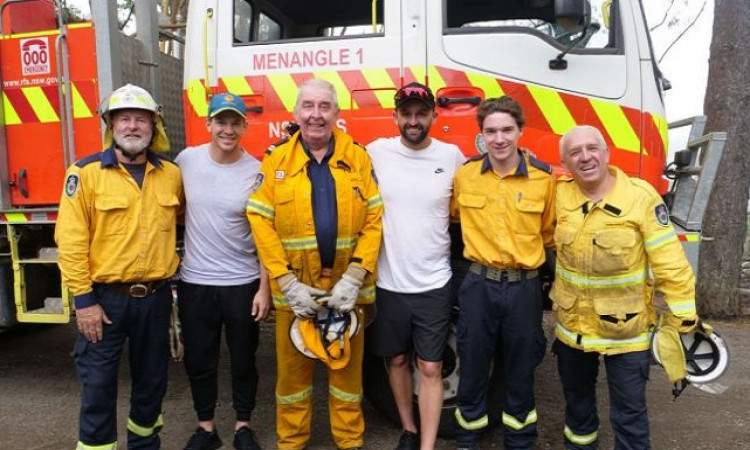 Along the way, the duo also visited Rural Fire Service Commissioner Shane Fitzsimmons, who thanked them for their solidarity with the affected families.

"Myself and Nathan, obviously with the day off, thought it would be good idea just to come out and basically say g'day and say thank you to all the fire fighters that have been doing such a fantastic job down here in southern New South Wales (NSW)," Fox Sports quoted Paine as saying by NSW RFS.

"Obviously they're one small part of a big part of what's been going on NSW and Victoria particularly. We just thought it was an important time for us to come out and say g'day and thank them and speak to some people in the community who have gone through a really tough time. It's been a really special day for us, to come down and see some of the devastation and see the size of the fires that have come through places like this has been absolutely mind-blowing, and when you do see it you do see the flat out bravery of our fire men and women that have come out here to try and save lives and property has been an unbelievable effort," he added.

Earlier during the just concluded third and final Test, Australia's bowling quarter had donated 19,000 dollars for each of the 19 wickets picked up during the match and according to Lyon, it was just a small act of kindness to a greater cause.

"The true heroes of Australia right now are the fire fighters and the volunteers and it's such a small little thing for us to donate 1000 dollars a wicket," Lyon said.

"I think it's good reward for us if we dig deep and our goal is to take 20 wickets to donate $20 grand for all the people affected by the fires. I think it's a great cause. I'm pretty proud about that. We're not doing it for recognition or anything like that, we just want to make sure that at the end of the day we're playing a game of cricket and there's been people been severely affected by fires and, if not, losing lives of family members," he added.

The ongoing bushfire crisis in Australia has so far killed 25 people and millions of animals while also destroying nearly 2,000 houses.

Besides cricketers, celebrities and personalities from all walks of life have also pledged to contribute to the bushfire relief.