Dubai, Sep 19 (CRICKETNMORE):  Pacer Bhuvneshwar Kumar and part-time off-spinner Kedar Jadhav took three wickets each as India restricted Pakistan to a paltry 162 in their Group A clash of the Asia Cup cricket tournament here on Wednesday. 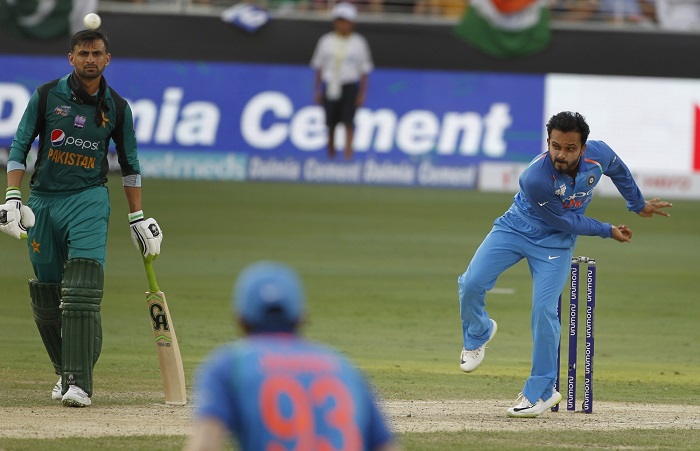 The lynchpins of a strong Indian bowling performance, Bhuvneshwar returned figures of 3/15 while Jadhav got 3/23.

Jadhav removed Pakistan captain Sarfraz Ahmed (6) around the halfway mark of the first innings before accounting for Asif Ali (9) and Shadab Khan (8) as Pakistan, who were relatively comfortably placed at 85/2 at one point, collapsed to 121/7.

The pair had stitched together a 82-run stand for the third wicket after openers Imam Ul Haq (2) and Fakhar Zaman (0) departed early with fit-again Bhuvneshwar Kumar (3/15) sending them back.

From then on, Pakistan could never recover as Mohammed Amir (18 not out) and Faheem Ashraf (21) joined hands for a 37-run partnership towards the end before Jasprit Bumrah (2/23) dismissed Ashraf and Bhuvneshwar and Bumrah got rid of Hasan Ali (1) and Usman Khan (0) respectively.

Electing to bat first, Pakistan got off to a slow start and could only manage 25/2 in the first 10 overs, losing two wickets.

Malik and Azam then got going well and negotiated the spin duo of Yuzvendra Chahal, who went wicketless, and Kuldeep well.

Moments later, Pandya had to be stretchered off after suffering what turned out to be a lower back injury during his follow through. Pandya clutched the floor and could not get up, needing attention from the medical team.

Just when the partnership seemed to be growing, Kuldeep once again underlined why he is a wily customer and can be unplayable at times with a ripper of a googly that pitched on middle and turned away from the batsman at the last moment to knock over his off-stump.

Malik then was dropped again at deep midwicket off Kuldeep as Bhuvneshwar failed to read a slog sweep in which the ball went high up in the air with the pacer misjuding the direction and over-running.

Captain Sarfraz, who had joined Malik at the crease, did not stay long as Manish Pandey took a superb catch at wide long-on off Jadhav.

Malik was run out soon after, failing to convert his start into a big one as the slide started for Pakistan.

Jadhav then added to his rivals' misery by picking up the wickets of Asif Ali and Shadab Khan as Pakistan failed to string together partnerships.

Amir and Ashraf tried hard to get important runs towards the end but could not bat out the full 50 overs.