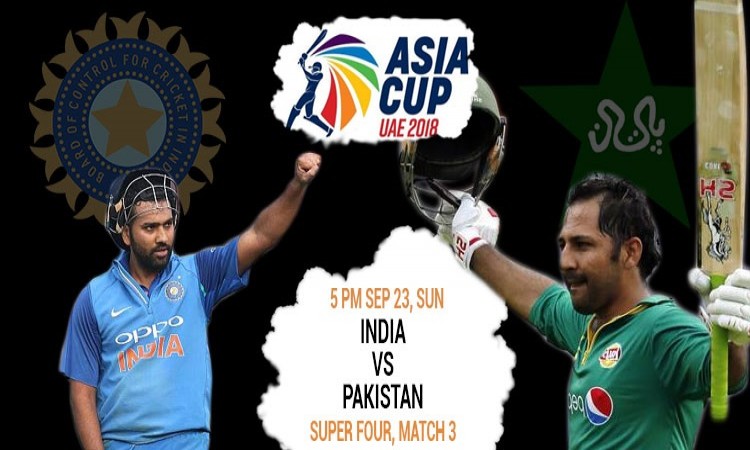 Dubai, Sep 22 (CRICKETNMORE):  Beaming with confidence after successive lop-sided wins over Pakistan and Bangladesh, a confident India will once again aim to brush aside the Green Brigade when the two sides clash in a Super Four tie of the Asia Cup at the Dubai International Cricket Stadium here on Sunday.

The men in blue are in sublime touch presently and after an average show against Hong Kong in their campaign opener, the Rohit Sharma-led side registered convincing victories against Pakistan and Bangladesh.

The last time when the two sides met, the Sarfraz Ahmed-led Pakistan side had no answer to either Indian bowling attack or the batting as the issue became a completely one-sided affair with India dominating in each department of the game.

Rohit will be eyeing another top-level show from his bowlers and batsmen, including himself. The skipper himself is in good touch with the bat, amassing 158 runs from three innings while opener Shikhar Dhawan, too, looks in fine form, putting 213 runs in three games.

Dinesh Karthik and Ambati Rayudu have also delivered decent performances in the middle-order and stumper M.S. Dhoni, who failed to fire against Hong Kong, looked good during his 33 off 37 balls against Bangladesh on Friday.

In the bowling department, pacers Bhuvneshwar Kumar and Jasprit Bumrah have also been phenomenal. Bhuvneshwar took three wickets against both Bangladesh and Pakistan, while Bumrah scalped three against the former and two against the latter.

Wrist spinners Kuldeep Yadav and Yuzvendra Chahal did not get any wickets against Bangladesh, but the duo managed to keep the pressure on the opposition.

Part-time spinner Kedar Jadhav, who came as a surprise package against Pakistan on Wednesday after his 3/23, could also pose a major threat to Pakistan's batting.

The Indian team looks balanced and the team management is unlikely to make any changes on Sunday.

On the other hand, Pakistan will need to come up with something special to stop a spirited team India.

Opener Fakhar Zaman has failed to deliver in the tournament so far and was dismissed for a duck on two previous occasions against India and Afghanistan and Pakistan may likely replace the left-hander.

Babar Azam and opener Imam-ul-Haq have been amongst top run earners, with 146 and 132 runs respectively from three outings.

Veteran Shoaib Malik seemed to have regained his touch with his 43-ball unbeaten 51 to help Pakistan to a three-wicket win over Afghanistan.

The bowlers, however, have not been up to the mark as they allowed minnows Afghanistan to put 257 runs on the board in 50 overs.

None of the bowlers makes to the top-10 of the wicket-taking chart and need to dish out something extra against a fine Indian batting line-up.

Overall, India will once again be the favourites but an unpredictable Pakistan has the ability to bounce back and so another high-voltage clash could be on the cards on a super Sunday.