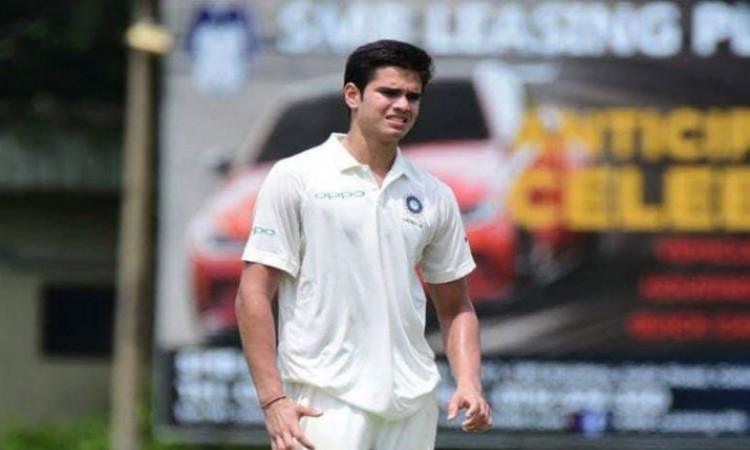 London, June 18 (CRICKETNMORE): Currently playing in the Second Eleven Championship for MCC Young Cricketers, 19-year-old Arjun Tendulkar impressed all as he took two wickets in their match against Surrey second XI on Monday. In fact, his delivery that dismissed Surrey second XI's opener Nathan Tilley has made cricket fans sit up and take note.

A video of the wicket was tweeted from the official handle of Lord's Cricket Ground and it has made quite a splash on social media. The tweet read: "Arjun Tendulkar, take a bow! He took this stunning wicket this morning for @MCCYC4L."

Arjun -- a fast bowler unlike his father Sachin Tendulkar -- hit the deck hard and the ball swung back into the right handed opener. Even before the batsman could counter it, the ball crashed on to the off stump. Arjun ended the game with figures of 2/50 from his 11 overs.

In July 2018, Arjun was part of the India U-19 team that played the first Youth Test match against Sri Lanka. He took two wickets in the match.

Earlier, Sachin had said that he never forced Arjun to play the game and wants him to decide on his own future. "He is passionate and I have not forced him for anything. I never forced him to play cricket. He earlier used to play football, then he developed interest in chess and now he is playing cricket.

"I told him whatever you do in life, dont take a short-cut, which my father (Ramesh Tendulkar) told me, and I tell him exactly the same thing...you will need to work hard and then it is upto you how you fare," he had said.

He took this stunning wicket this morning for @MCCYC4L.