Andre Russell's knock took the game away from us, says Rashid Khan

Kolkata, March 24 (CRICKETNMORE):  Andre Russell's blitzkrieg in the death overs took the game away from us, Sunrisers Hyderabad's spinner Rashid Khan said after Kolkata Knight Riders (KKR) beat them by six wickets at the Eden Gardens in an IPL game on Sunday. 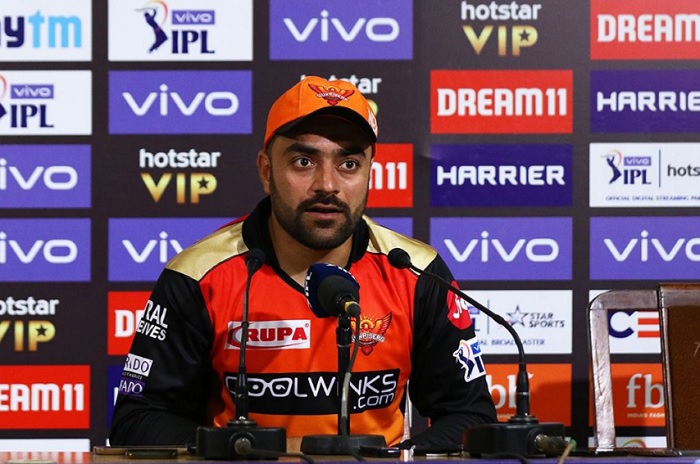 Chasing 182 for victory, KKR were up against it despite Nitish Rana's 47-ball 68. Needing 53 runs from the last three overs, Russell came in to bat after Rana's dismissal and smashed Siddharth Kaul for 19 runs and Bhuvneshwar Kumar for 21 runs to take the game away from the visitors with two balls to spare.

"We just couldn't finish well in the last three overs. That happens in T20 cricket. Russell played a great knock. He took the game away from us. He played all the shots, the bowlers did not bowl bad deliveries, but he just smashed all of them," said Rashid, who took the wicket of Rana after a 12-minute power failure to push Sunrisers closer to victory.

Rashid, who hit a 10-ball 34 last year to help Sunrisers beat KKR in the second qualifier and qualify for the final, added they would also look to such a player lower down the order.

Sunrisers posted a competitive 181 as comeback man David Warner hit 85. Asked if they were 15-20 runs short, Rashid said: "180 plus was a good total. Usually, at Eden 170 plus is a good total and can be defended. The bowling line-up that we have, it was not that we scored less or batted badly. We just could not finish well, and that happens."

Rana, meanwhile, said he would fail to describe in words how brilliant Russell was. "I cannot describe his batting in words. It was unbelievable".

"In 18 balls we needed 53 runs and we won the match with two balls to spare. That's how capable he is. The game plan was whatever we needed, we would leave it to Russell and that worked."

Rana chose not to review after being trapped by Rashid and he said he did not go for it as Russell was batting in full flow at the other end. "I decided not to take the DRS because I wanted to keep the review for Russell. This win was important for us especially at the start," he said.