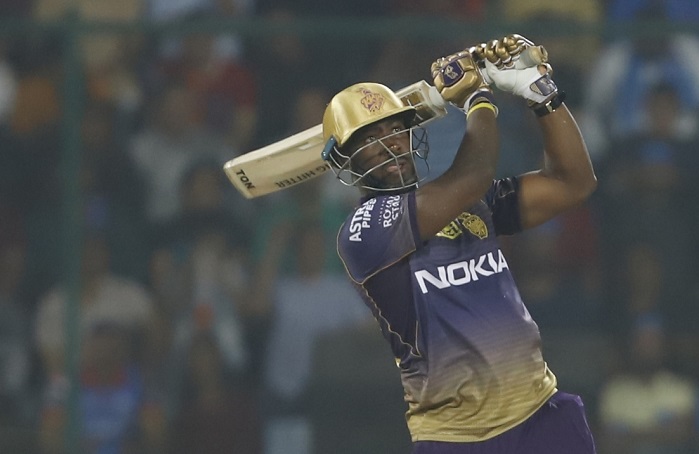 Russell came out to bat with KKR needing 67 off 26 balls. Skipper Dinesh Karthik (19) got out in the next over and in the last three overs, the away side needed 53 runs off 18 balls.

It is from there that Russell took over, smacking seven sixes and a four to help KKR win with five balls to spare. KKR posted 206/5, their highest run-chase in IPL history. RCB, thus, remained winless after five games.

Russell hit Marcus Stoinis for three back to back sixes in the 18th over and then took on Tim Southee with figures reading 6-6-6-4-6 to leave the visitors needing just one run from the last over. He associated with Shubman Gill (3 not out) to put together a 14-ball 53 run stand for the sixth wicket.

It poured cold water on Virat Kohli and AB de Villiers' show in the first innings as the pair roared back to form to help RCB post 205/3.

But Robin Uthappa (33; 25b 6x4) joined hands with Lynn to add 65 runs for the second wicket. But just before the halfway stage, Uthappa lost his wicket trying to clear long off where Tim Southee took the catch off Pawan Negi (2/21).

Lynn was dropped on 42 by Mohammed Siraj off Stoinis in the 11th over, but there was not much damage done as Negi castled him with a terrific delivery that spun heavily to beat the Australian's outside edge.

It looked over for KKR from there on before Russell took it upon himself to finish the game in a way only he can.

Kohli was dropped by Narine on 35 while Lockie Ferguson could not hold on to a tough De Villiers catch when he was batting on 11.

The duo made the most of their second lives and with Stoinis hitting a 13-ball 28, RCB scored 127 runs in the last 10 overs with the last over from Prasidh Krishna going for 18 runs.

This was Kohli's 35th IPL fifty as the India skipper went past Suresh Raina to become the T20 meet's highest ever run-getter.

While Kohli brought up his half-century in 31 balls, De Villiers took 28 deliveries to get there.

Kohli looked in sublime touch from the word go, milking Prasidh Krishna for two consecutive boundaries off the first two balls he faced.

Parthiv Patel (25) also looked good to continue his rich vein of form but part-time spinner Nitish Rana cut short his stay by trapping him plumb in front in the eighth over.

In the first ball of the same over, Rana could have sent Kohli back in the hut as well but Narine dropped him at short midwicket.

Making the most of the reprieve, the Indian captain went from strength to strength, hitting Kuldeep Yadav four a four in the 10th over as RCB were 78/1 at the halfway stage.

De Villiers then joined the party after Ferguson grassed a difficult chance running in from long on off Kuldeep in the 12th over.

From there on, De Villiers switched gears like only he can to hit Narine for two fours in the next over and two sixes off Andre Russell in the 14th over as the West Indian leaked 16 runs.

After Kohli's dismissal, KKR tried to stem the flow of runs and when De Villiers holed out to Shubman Gill on the extra cover boundary off Narine, it looked possible.

But Stoinis hit 18 off Prasidh Krishna's last over to guide his team past the 200-run mark.