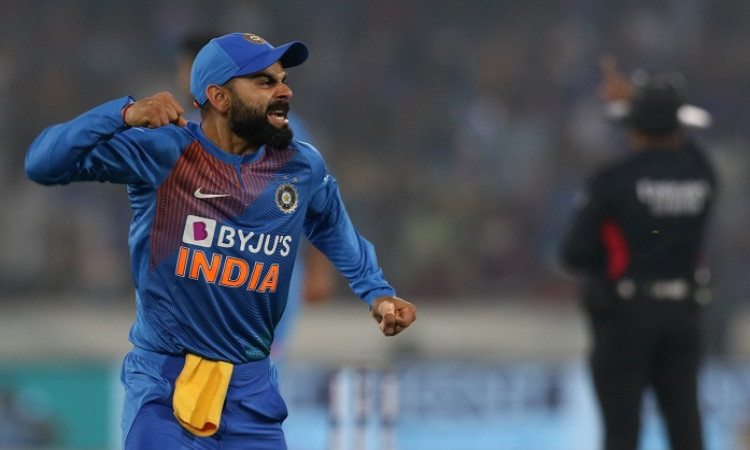 On Friday evening, Kohli brought the Hyderabad crowd to its feet as he bettered his personal best and scored an unbeaten 94 off just 50 deliveries to help India chase down 208-run target - their highest ever run-chase in the shortest format of the game.

One of the great aspects about Kohli's inning on Friday was he was not in his elements for most part of his knock. Top edges, inside edges, misjudgment of shots, nearly dragging the ball back on, or arguing with the umpires for no-balls (for height) and wides -- the 31-year-old appeared all over the place and was just trying too hard without achieving the desired result.

However, he still kept hanging on and played what can be described as one of the best innings played while chasing a target.

"India's highest chase in T20 Internationals. A masterclass from Virat Kohli , made to look so easy and finishing the job," said VVS Laxman about Kohli's knock.

On way to his unbeaten 94, the Indian skipper hit six fours and as many sixes. After hitting Kesrick Williams for a six in the 16th over, Kohli even used his bat as an imaginary notebook to "tick" the bowler's name off.

Bollywood actor Amitabh Bachchan was also in awe after watching the knock from the Indian skipper and said that one should not mess with Kohli. "Yaar, how many times I have told you this, don't tease Virat, but you did not listen to me, now see he gave you a perfect response, look at West Indies' face, how much he rattled them (with due respects to Anthony Bhai)," Bachchan tweeted in Hindi.

West Indies skipper Kieron Pollard also praised Kohli and said: "He is an animated character, a great batsman and he continues to show the world that he is a world class batsman.

"His theatrics or whatever, it comes as part and parcel of the game. Sometimes you have to be like that to pump yourself to score runs and so I am fine with it," he added.