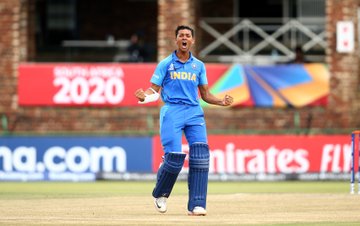 "He (Jaffer) and Sachin sir are my idols," Jaiswal told Times of India. "Wasim sir keeps telling me how to build an innings. Since he's played in South Africa, he gave me tips on how to tackle the pace and bounce on the quick wickets here. Sachin sir gave me valuable advice, saying, 'Every bowler will give you a clue about what he's going to bowl next. You've to concentrate and catch that clue.'"

Jaiswal also said that he asked a lot of questions off batting legend and current National Cricket Academy chief Rahul Dravid, who paid the U-19 camp a visit last month. "I keep asking him a lot of questions. I asked him how to bat when the team is under huge pressure. He gave me simple advice: 'Just focus on the next ball very, very hard'," said Jaiswal.

Jaiswal has turned in consistent performances throughout the tournament in which India have won every match they have played thus far. The pinnacle came in the semi-final against arch rivals Pakistan, in which he scored an unbeaten century to take India to a 10-wicket win.

Jaiswal was highly rated in the domestic circuit before the U19 World Cup as well, most prominently scoring a double hundred for Mumbai in the Vijay Hazare Trophy last year. It made him the youngest to get to the mark in 50-over cricket. The fact that he sold pani puris to make ends meet before making it in domestic cricket has only enhanced his reputation.