Bangla Tigers pulled off a sensational 19 runs win over newcomers New York Strikers in the opening match of the Abu Dhabi T10 at the Zayed Cricket Stadium here on Wednesday. 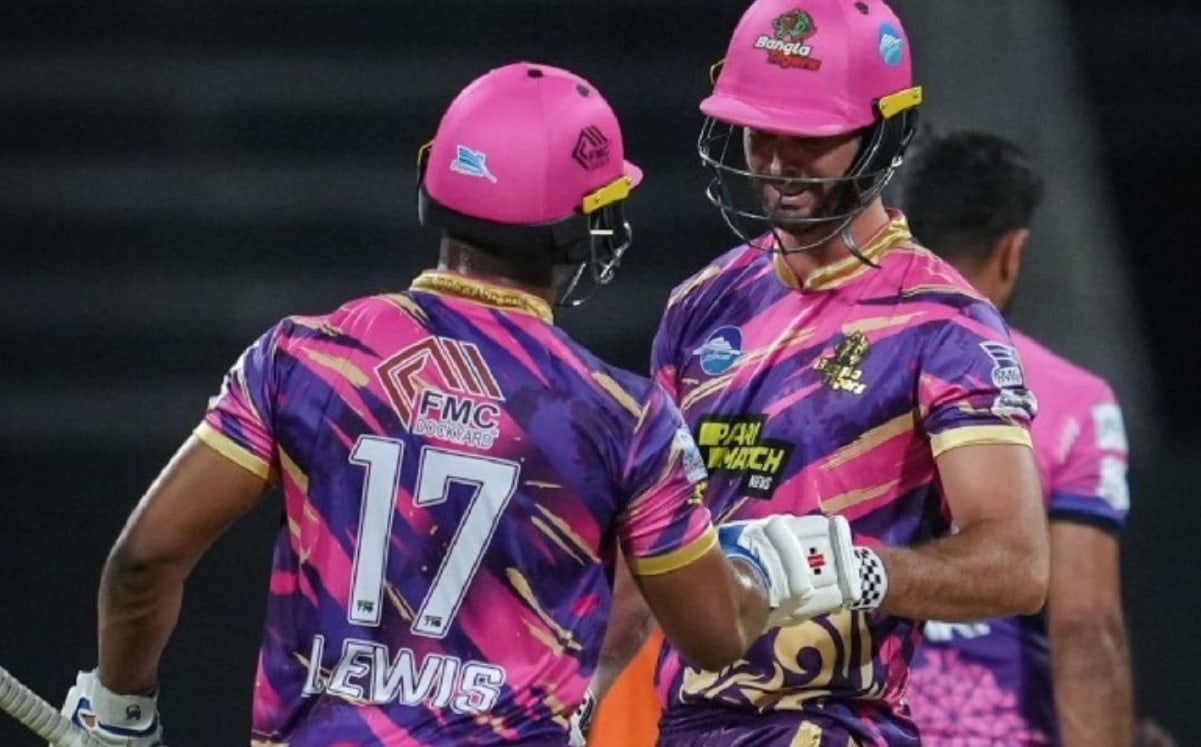 Bangla Tigers pulled off a sensational 19 runs win over newcomers New York Strikers in the opening match of the Abu Dhabi T10 at the Zayed Cricket Stadium here on Wednesday.

The architect of the Bangla Tigers' win was opener Evin Lewis who hit 58 runs off 22 balls with seven sixes and two boundaries to help post an impressive total of 131 for 5 in 10 overs. New York Strikers, despite an unbeaten 45 off 19 balls with three boundaries and four sixes from skipper Kieron Pollard, could not attain their target.


Ex-Aussie Coach Langer Could Be Tarnishing His Legacy With His Latest Outburst, Feels Simon O'Donnell

New York Strikers had won the toss and elected to field. Hazratullah Zazai and Evin Lewis opened for Bangla Tigers. The first boundary of the tournament came off the third ball from Romario Shepherd when Zazai hit it past the short fine leg. Lewis too hit the last ball over the extra cover for another boundary.

Wahab Riaz, who bowled the second over, struck with the second ball by getting Zazai out for 10, forcing him to top edge to Jordon Thompson at fine leg. Thompson took a brilliant catch diving full length. One-drop Joe Clarje fell to the first ball he faced from Riaz to another fine catch, this time taken by Eoin Morgan at extra cover.

Colin Munro, who joined opener Lewis, hit the last ball of Riaz's over for a six over long leg. Munro continued to go for his shots and hit Jordan Thompson for a boundary to long-off and a six to fine-leg. Ravi Rampaul, who was introduced for the fourth over, found his third delivery cut powerfully to backward point boundary by Munro. Lewis completed that over with a six to mid-wicket.

The fifth over was exciting as Lewis hit Nav Pabreja for two sixes, the first six off the second ball to mid-wicket and the second one off the fourth ball over long off. Lewis also hit the last ball for another six over long-on. At the half way mark, Bangla Tigers were on a healthy 68 for 2.

Jordan Thompson bowled a brilliant sixth over allowing Munro to pick only one boundary and also took the prize wicket of Munro with the last ball of the over. Munro's innings too ended to a fine catch by NavPrabeja at short third man jumping and pulling off the catch on the rebound. Riaz who was re-introduced for the seventh over could not stop Lewis from going for his huge shots. He hit him for two sixes over deep square leg. Lewis reached his half century in 18 balls flicking Shepherd over square leg for a six.

He also hit the next ball over point for another boundary. The total went past the 100-un mark by the end of the eighth over.

Lewis' fine knock of 58 came to an end when Rampaul got him out to the first ball of the ninth over, caught by skipper Pollard at long on. Rampaul also got next man Benny Howell out through Powell's second catch at long-off for 1. The ninth from Rampaul yielded just five runs and he took two wickets.

The last over from Nav Pabreja was well utilized by Shakib Al Hasan who hit a boundary off the second ball, and two sixes, one of the fourth ball and another off the last ball to give an impressive total of 131 for 5.

Chasing a run rate of 13.10, New York Strikers lost an early wicket when UAE's Muhammad Waseem got out to Shakib Al Hasan's third ball of the first over for a duck , caught by his UAE teammate Rohan Mustafa at deep square leg. It was another superb catch of the day as he jumped in time inside the boundary line for the catch. The second over was sensational with Jake Ball being hit for 25 runs. Azam Khan began by hitting the first ball for a boundary to short third man, second delivery pulled for a six and the fourth, fifth and sixth deliveries were also hit for boundaries.

Shakib bowled another brilliant over giving away only five runs, tying down opener Paul Stirling and Azam Khan. The fourth over began with Azam Khan hitting another six over square leg but fell to the fifth ball of that over hitting to Cutting at mid-off. Azam's 13-ball knock of 34 had four boundaries and two sixes.

Eoin Morgan, who joined Howell, lasted only four balls to score seven runs as Matheesha Pathirana had him caugrht by Howell at long-on. The fall of wickets mounted pressure on New York Stirikers, and they were 54 for 3 needing to score at over 15 runs an over. All eyes turned towards Kieron Pollard to lift the team to the target. He hit Rohan Mustafa's third delivery of the sixth over for a six over long on. Mustafa struck to clean bowl Paul Stirling for 7. Pathirana bowled tightly and had Romario Shephered bowled for four runs. Thompson hit Pathirana's fifth delivery for six to keep the runs coming.

Everything changed after a fine over from Rohan Mustafa who clean bowled Thompson out for 7. Though Mustafa was hit for a six and a boundary by Pollard, 46 runs were needed from the last two overs.

UAE's Umair Ali was called to bowl the ninth over. Pollard hit his third delivery for a boundary and fourth for a six. The fifth ball saw Akeal Hosein getting run out by Hazratullah but Pollard hit the last ball for a boundary. Fans now moved to the edge of their seats with 28 runs needed off the last over. Jake Ball gave away a leg bye single to Wahab Riaz off the first delivery.

Pollard hit the third ball for a six to keep hopes alive but Ball bowled a brilliant fourth delivery giving no runs and only a single to Pollard off the fourth ball. Riaz got run out off the fifth ball and Ball gave away no run to Pollard after that thus restricting New York Strikers to 112 for 8 in 10 overs.

Pollard hit the third ball for a six to keep hopes alive but Ball bowled a brilliant fourth delivery giving no runs and only a single to Pollard off the fourth ball. Riaz got run out off the fifth ball and Ball gave away no run to Pollard after that thus restricting New York Strikers to 112 for 8 in 10 overs.