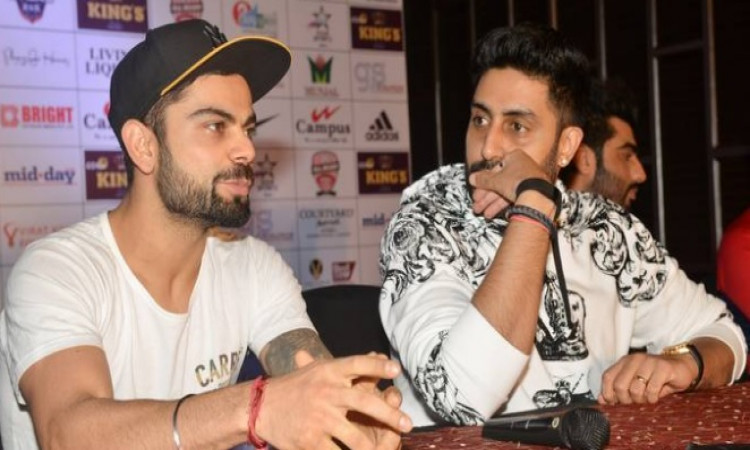 May 25 (CRICKETNMORE) Virat Kohli and Harry Kane sent sports fans into a frenzy when they posted a selfie together at the Lord's Cricket Ground on Friday. Kohli is currently in England as Team India gears up for the 2019 World Cup. While the Indian skipper and Kane have interacted over tweets before this, this is the first time that they were meeting each other.

But Bollywood actor Abhishek Bachchan saw this as an opportunity to take a friendly dig at Kohli on Twitter. In the reply section, Bachchan posted a photo of Kohli posing with the jersey of the Premier League club Chelsea, a major London based rival of Tottenham Hotspur for whom Kane plays.

However, Kohli has never publicly stated which football club he supports and has since been speculated to be a fan of Chelsea and Real Madrid. Interestingly, during India's tour of England in 2018, Kohli posted with Southampton striker Danny Ings and received a Saints jersey with his name on the back.

Both Kane and Kohli are preparing for big showdowns for their respective teams. While the England football team are not playing any major matches any time soon, Spurs will be facing Liverpool in their first ever Champions League final on June 1. He had to sit out of the second leg of their quarter-final clash against Manchester City and the both legs of the semi-final against Ajax and is looking to be fit enough to start in the big title clash.

Kohli, on the other hand, is preparing with the rest of the Indian team for the World Cup that starts on May 30. India's first match will be against South Africa which will be played on June 5. They play their first warm-up game against New Zealand on Saturday.