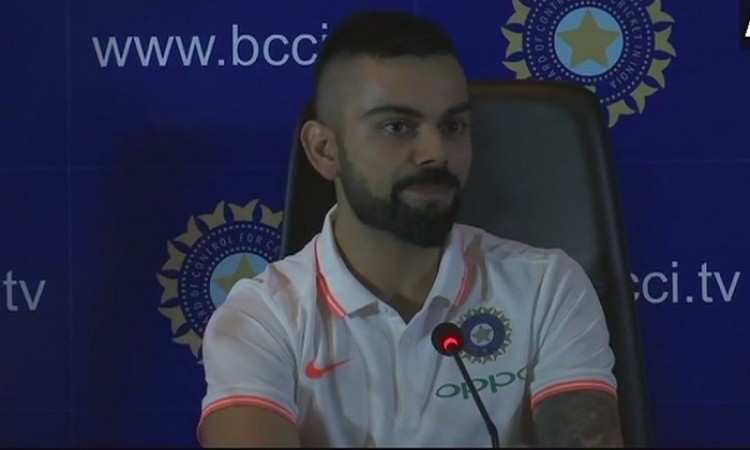 While the current India squad are not exactly 'tigers at home and mice abroad' as the late Nawab of Pataudi had once said, they had been below par in their recent South Africa tour, losing the three-match Test rubber 1-2.

The last tour to England under Mahendra Singh Dhoni was disastrous for India, since they suffered a 1-3 loss with Kohli's batting turning out to be a flop show.

With Kohli now leading the team, the Delhi batsman hopes to change the trend of Indian teams not being good travellers.

Addressing a press conference along with coach Ravi Shastri ahead of the team's departure, Kohli said: "Our strategy will be the same as it was during the tour to South Africa and Sri Lanka. The mindset doesn't change on the basis of one series. We have patience and the focus is on how to win matches."

"When we were playing the Test series in South Africa, initially people thought we were outplayed but then the third Test happened and it was followed by the limited overs matches."

"People can't see the small things but we as a team know how we did. We are a team looking forward to travelling to other countries and perform. We are looking to change the trend of teams not being good travellers," he added.

Echoing the statements of the skipper, Shastri said: "Our endeavour in every series will be the same. We won't change any strategy because we are playing in any other nation. For us, an opposition is an opponent. Our aim is to strive for consistency."

The 29-year-old Kohli asserted that the long break after the Indian Premier League (IPL) and the decision to forgo his county stint has actually turned out to be a blessing in disguise and helped him rejuvenate for the two-month-long tour.

Addressing concerns surrounding his fitness, the Indian skipper said: "I am 100 percent fine now and absolutely ready to go. My neck is fine now."

"I've had good practice and played 6-7 sessions in Mumbai. Breaks like these make you fresh mentally. It has made me excited to go back on to the pitch again."

"In hindsight, not playing county cricket was the best thing to happen at that moment although I wanted to experience the conditions. England is a place where we haven't played so much, there is a big gap of four years. So I wanted to acclimatize to the damp conditions," he added.

Kohli added: "When I look at it now, attempting to get used to conditions with a 90 percent fit body wasn't a good idea. Glad I missed it. Now I am 110 percent and I would much rather be in this position. I need to be fresh and that was the best thing to happen."

The Indian team will play two T20Is against Ireland on June 27 and 29 that would be followed by three T20Is, three ODIs and five Test matches against England starting from July 3.