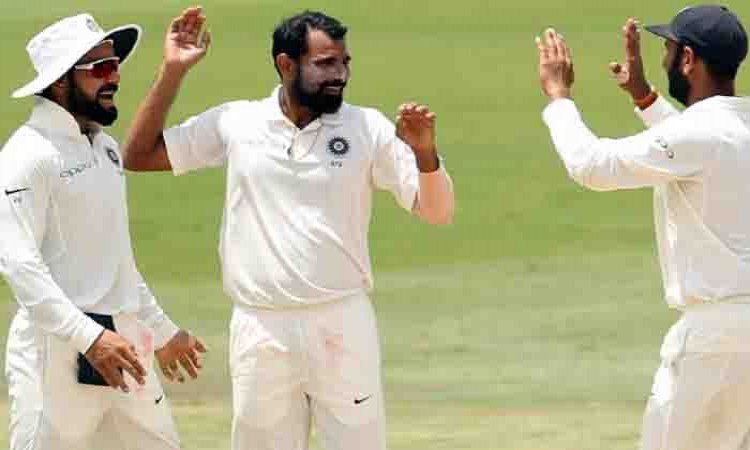 Centurion, Jan 16 (CRICKETNMORE) - Seamer Mohammed Shami took three wickets to India pull India into contention in the second Test as they reduced South Africa to 173/5 in their second innings at lunch on the fourth day here on Tuesday for a 201-run lead.

Faf du Plessis (12 batting) and Vernon Philalnder (3 batting) were unbeaten for the hosts at the break.

The overnight partnership of de Villiers and Elgar threatened to take the game away from India. They had joined hands with South Africa at 3/2 and on Tuesday, they continued from where they left.

Both of them looked bright and maintained a very healthy rate in the first hour of play with boundries coming their way easily.

While de Villiers in control against the Indian bowlers, Elgar, who completed his ninth Test career fifty, was resolute.

Shami broke the stand at 141 runs when a rising delivery kissed de Villiers' gloves for an easy catch to waiting wicket-keeper Parthiv Patel.

Soon, left-hander Elgar pulled one straight into the hands of Lokesh Rahul at deep square leg as the hosts lost their fourth wicket for 151 runs.

It could have been 151/5 had Rahul pulled off a half chance at short-leg off du Plessis, who was then on six. Du Plessis struggled against off-spinner Ravichandran Ashwin and managed to push it to the right of Rahul.

Shami continued his impressive spell as the got rid of de Kock, who edged an away-moving ball to Parthiv, leaving his side at 163/5.

Du Plessis and Philander negated the Indian bowlers till the umpires called for lunch.