Colombo, March 14 (CRICKETNMORE) -  Skipper Rohit Sharma led from the front with a fluent half century and teenaged off-spinner Washington Sundar scalped three wickets to help India beat Bangladesh by 17 runs at the R. Premadasa Stadium here on Wednesday and guide the men-in-blue to the final of the Nidahas Trophy T20 tri-series. 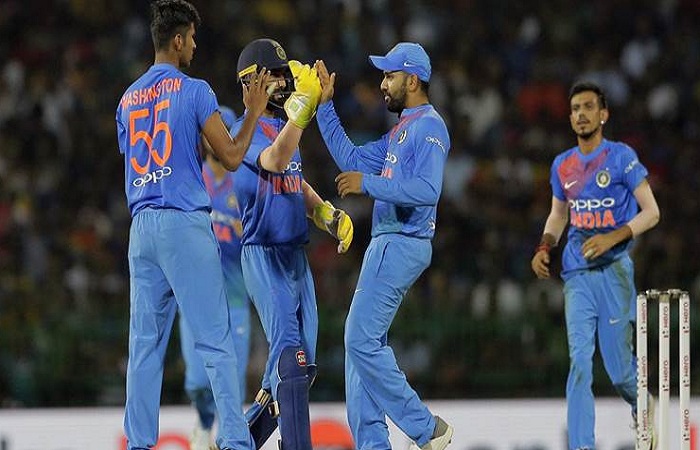 Chasing a healthy 177, Bangladesh were off to a forgettable start, thanks to Sundar's (3/22) exploits with the new ball as opener Liton Das (7) and one-down Soumya Sarkar (1) perished to the tweaker cheaply.

Stumper Mushfiqur Rahim raged a lone battle with a 55-ball unbeaten 72, comprising eight fours and a six but that was not enough for his team as Bangladesh could only muster 159/6 in the end.

Sundar came back to pack back the other opener Tamim Iqbal (27), who looked threatening with his four boundaries and a six off Shardul Thakur's first over before losing his leg stick to the 18-year-old tweaker.

Tottering at 40/3, Bangladesh's hopes were further dented when leg-spinner Yuzvendra Chahal (1/21) saw the back of skipper Mahmudullah (11) caught by Lokesh Rahul.

Despite losing his partners at the other end, Rahim, who came in at No.4 started well, occasionally dispatching the odd balls to the boundary until Sabbir Rahman (27) joined him to add 65 runs for the fifth wicket.

But the joy was shortlived as Thakur came back to shatter the defences of Rahman, reducing Bangladesh to 126/5 even as the Indian bowlers tightened the flow of runs towards the later part of the innings.

Pacer Mohammed Siraj, who came into the playing XI replacing left-armer Jaydev Unadkat, was at the receiving end of Rahim's aggression but managed to contain the Bangladeshis towards the end.

Earlier, the Indian openers Rohit and Shikhar Dhawan (35) clicked at the right time with a 70-run stand after being put in to bat.

Skipper Rohit, who was out of form for quite a long time, returned to form and slammed his 13th T20 fifty (off 42 balls).

Aiming to cement his place in the T20 side, veteran Suresh Raina (47) also contributed handsomely to the cause.

The last four overs saw some brilliant hammering from Rohit and Raina before the southpaw, who was three short of his 50 at that point, was caught by Sarkar off Rubel Hossain. His 30-ball knock comprised five boundaries and two sixes.

The last ball of the innings saw Rohit, who played 61 balls, getting run out while going for a single and thus India posted 176 runs in their allotted 20 overs.