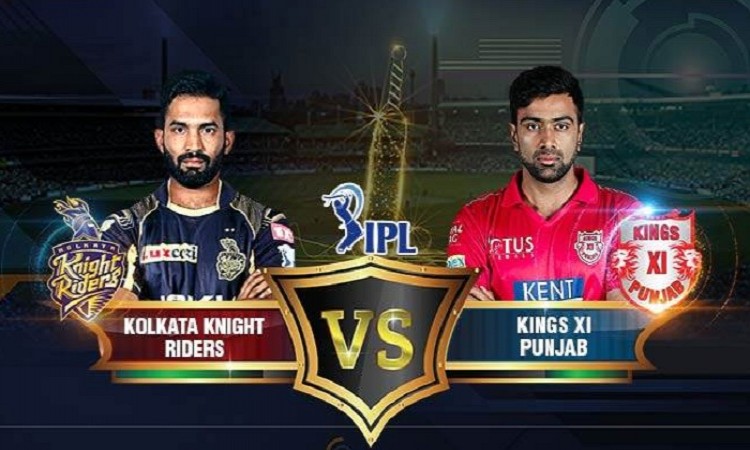 Indore, May 11 (CRICKETNMORE) - Kings XI Punjab will be aiming to consolidate their position in the top three of the Indian Premier League (IPL) points table when they take on Kolkata Knight Riders (KKR) at the Holkar Cricket Stadium here on Saturday.Both the sides are coming off a defeat and will be desperate to return to winning ways as the cash-rich league reaches its business end.While Punjab are placed third with 12 points in their kitty, Kolkata are fifth in the league table with 10 points.

Kolkata was hammered by Mumbai in their last encounter as the Rohit Sharma-led side registered a thumping 102-run victory over them. Punjab too, suffered a narrow 15-run loss to Rajasthan Royals in their last outing.Punjab's batting mostly relies on openers Chris Gayle and Lokesh Rahul as the duo have accumulated 471 and 311 runs respectively.In the match against Rajasthan, when all of the Punjab batters failed to fire, Rahul rose to the occasion smashing an unbeaten 95 off 70 balls.The Punjab openers have been a major reason behind their success as the duo have handed a perfect start to their side on several occasions in this year's edition.

Karun Nair has also been impressive scoring 243 runs from nine innings but veteran Yuvraj Singh, Aaron Finch and Mayank Agarwal are yet to make their presence felt in the middle-order.The trio's poor form will be a major cause of concern for the team management and it is high time for them to come out with their best.In the bowling department, skipper Ravichandran Ashwin and medium-pacer Mohit Sharma add depth to the line-up.Also, pacers Barinder Sran and Andrew Tye, and Afghan spinner Mujeeb ur Rahman shoulder the bulk of the responsibility.

While Australian Tye has 16 wickets from eight games with an economy of 7.77, pacer Ankit Rajpoot and Mujeeb Ur Rahman have eight and 14 wickets each.On the other hand, Kolkata will need to put behind their humiliating loss to Mumbai and come together as a unit if they want to seal a play-off berth.Kolkata, who now have little room for error, were handed their biggest defeat in the league's history by Rohit Sharma's men.For the men-in-purple, openers Chris Lynn and Sunil Narine have failed to perform consistently.

Skipper Dinesh Karthik has been the only consistent batsman with the willow, amassing 321 runs from 11 matches.Vice captain Robin Uthappa will have to come up with an extraordinary show to help his side inch forward along with the misfiring middle order.Kolkata, whose bowling unit mostly relies on the spinners, leaked plenty of runs against Mumbai Indians except Narine.Chinaman Kuldeep Yadav has been decent with eight wickets from 11 games but he needs to dish out something special against Punjab.