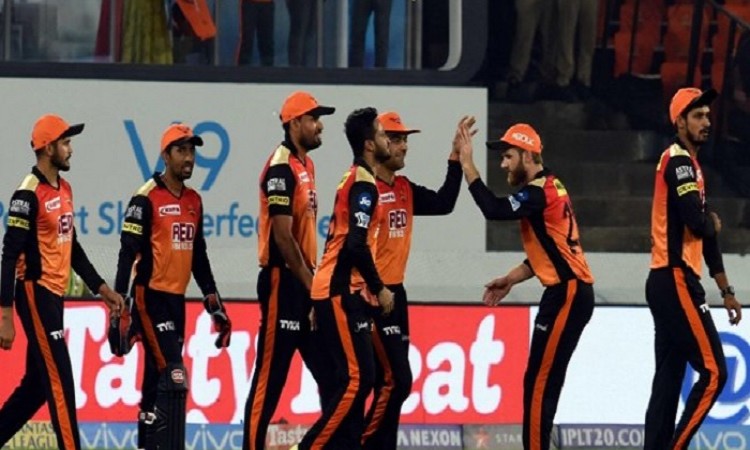 After posting 147, Mumbai bowlers did a fantastic job throughout the match but at the end, pacer Ben Cutting failed to hold his nerves and thus lost the issue on the last ball of the innings.

The real action unfolded in the last over. With 11 needed in the 20th over, Deepak Hooda (32 not out), who set the platform at the end, slammed a huge six off Cutting and then the bowlers delivered the wide.

Now, with four needed in five balls, last pair of Hooda and Billy Stanlake (2) some how managed to make it one ball-one run affair and finally, the latter slammed it over the mid-wicket to seal the issue.

Unlike the last match, Mumbai openers Wriddhiman Saha (22) and Shikhar Dhawan (45) gave the perfect start, forging a 62-run partnership. But in the seventh over, Saha was dismissed by Mayank Markande.

After adding 11 more runs to the score with Dhawan, new batsman Kane Williamson (6) departed. In the very next over, Dhawan, who seemed good in the middle, was also sent packing.

With 77/3 in ninth over, middle-order batsmen Manish Pandey (11), Shakib Al Hasan (12)and Yusuf Pathan (14) failed to utilise the start and went cheaply. Pathan and Rashid Khan (0) were sent back to the pavilion in the same over.

Hooda, however, tried to narrow the gap between their score and the target.

With 11 runs needed in 11 balls, Mustafizur Rahman bowled a brilliant over, taking two wickets giving only one run. He dismissed Sidharth Kaul (0) and Sandeep Sharma (0). The scoreboard was then reading 137/9.

The action unfolded in the last over in which Hodda and Stanlake guided their team to a thrilling victory.

Put in to bat, Mumbai started off on a bad note as skipper Rohit Sharma (11) departed in the second over with just 11 runs on the board.

Incoming batsman Ishan Kishan (9) also failed to give support to Lewis as he was dismissed in the sixth over.

In the same over, set batsman Lewis was also dismissed. He was clean bowled by Kaul. In his 17 ball innings, Lewis slammed three boundaries and two sixes.

Suryakumar Yadav and Krunal Pandya (12), however, tried to steady the innings but the latter was sent packing by skipper Shakib Al Hasan. Kieron Pollard (28) also tried to pace up the innings but after having a good start, he went back to the pavilion. Pacer Stanlake took his wicket in the 15th over.

Unperturbed by the fall of wickets, Yadav played sensibly, but lack of support from lower-order batsmen resulted in his wicket. Yadav was dismissed in the 19th over. Mayank Markande (6 not out) and Jasprit Bumrah (4 not out) only managed to score nine runs in the last over to finish the proceeding at 147 in their allotted 20 overs.