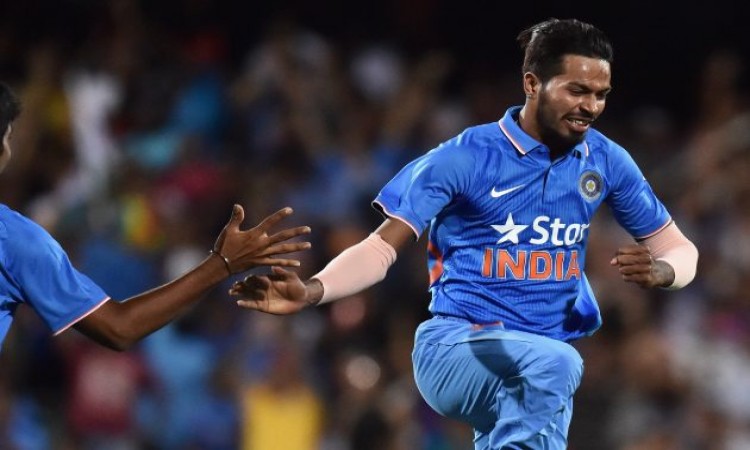 Bristol, July 8 - Hardik Pandya returned with career best bowling figures (4/38) but England rode on their superb start to post a challenging 198/9 in 20 overs in the third and final T20I against India at the County Ground here on Sunday.

But the all-rounder came roaring back to first remove Morgan and Hales in the same over and then repeating the same in the 18th over to send Stokes and Bairstow back on his fourth and sixth delivery.

Chinaman bowler Kuldeep Yadav was dropped raising a few eyebrows as he had taken five wickets in the first game.

Veteran M.S. Dhoni was also at his best behind the stumps, taking five catches and effecting one brilliant run out in the last ball of England's innings to get the wicket of Chris Jordan.

Openers Jos Buttler (34; 21b; 7x4) and Roy gave England a flying start with poor fielding from the visitors helping in the cause too.

In the first six overs of Powerplay, England scored 73/0 with both in-form batters smacking 10 fours and four sixes in the process.

Deepak Chahar (1/43) -- making his international debut in place of injured Bhuvneshwar Kumar -- did not start off well, going for 13 runs with Buttler hitting him for three fours.

In the next over, Buttler took Umesh Yadav (1/48) for two back-to-back fours to set the tone for his team before Roy turned on the heat.

The 27-year old hit the first six of the match in the fourth over, a princely down the ground shot at long off before tonking Siddharth Kaul (2/35) for another maximum in the next over to show his intent.

To make matters worse, Buttler was dropped by Yuzvendra Chahal (0/30) just after Powerplay although it was a difficult chance.

In the next ball, Roy brought up his fifty in style, slapping Chahal for a six over long-on.

Kaul finally ended the carnage by rattling the stumps as Buttler tried to swipe across the line. Roy and Buttler stitched together 94-run partnership for the first wicket.

Chahal followed it up with an economical over, giving away just three runs. Chahar then got his first international scalp with a slower delivery that the dangerous Roy flicked to Dhoni behind the stumps.

At the halfway stage, England were 111/2 with two new batsmen in captain Eoin Morgan and Alex Hales at the crease.