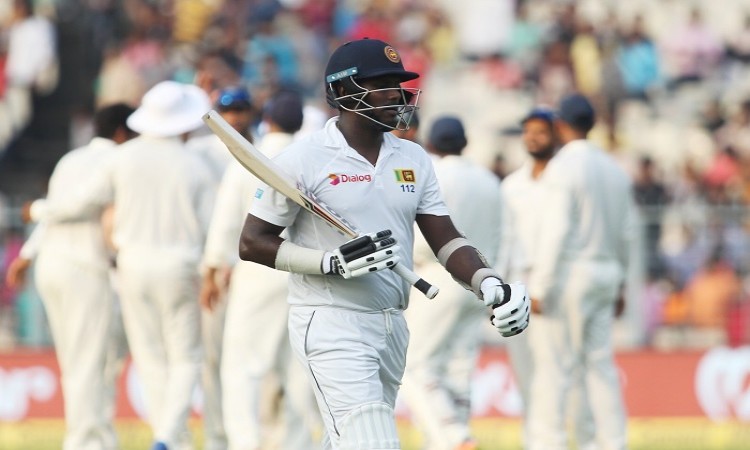 "Especially in the last few years, Indians have produced some fantastic fast bowlers. The three (Shami, Bhuvneshwar and Umesh) are top class and you need to be able to mentally prepared with good skills to tackle them. We definitely can, we have a very good batting unit," Mathews told reporters after the third day's play.

"All three are very skillful. They keep coming at you and you can't relax at all. If you see the loose balls were very minimal. They were top class," he said.

Together with middle-order bat Lahiru Thirimanne (51), Mathews struck a 50 to take the tourists to 165/4 after bowling India out for 172.

"We knew it was a challenging wicket and it was not going to be easy right from the outset. It's a big challenge for the batters, once in a while you play and your skill is tested," he said.

"It was not easy, they have been bowling really well. But (to handle them) it comes with experience, you learn when you play more. I've learnt quite a bit to handle these situation."

The 30-year-old expressed disappointment that he could not covert his fifty into a century.

"Fifties are not going to take us anywhere, we got to get to hundreds. It's not something that will do any help to anyone and my team. I know it's not going to be easy from here. We all know India are a fantastic team, we just have to be on the top of our game here," he said.

Mathews, who missed the entire Pakistan series owing to calf injury, said it was a frustrating year for him.

"It has been a quite a frustrating year for me, especially with injuries. I've been going in and out of the side. It's not easy to have the same rhythm. I had a good two months' layoff. I'm in a good shape and hope I can carry on doing a good job for Sri Lanka," he said.

Mathews said keeping the workload in mind, he has chosen to concentrate solely on his batting and it seemed to paying dividends.

"I had a good sort of three years of cricket from 2013 onwards but my body is taking a toll now. I have to manage my workload. I think it comes with experience. I played a few more games and than the rest of the boys," he reflected.

"I've temporarily stopped bowling in Tests just to manage my workload and see how it goes. As of now playing as a batsman only," he added.

Sri Lanka are on the cusp of taking the lead being seven runs short at the end of third day's play. Mathews said there's still a long way to go.

"You never know, cricket is a funny game. We can't take foot off the gas, and got to score as many runs as possible. I don't know on this wicket, what is enough. In the next two days, we hope to get a result and play some good cricket."

Mathews stepped down from all the three formats as captain after suffering a shocking ODI series defeat to Zimbabwe in July.

"I can't think of being a former captain or as a premier batsman in the team. All are equal. I just have to go out there and take responsibility of scoring as many runs as possible and grab the opportunity," he said.